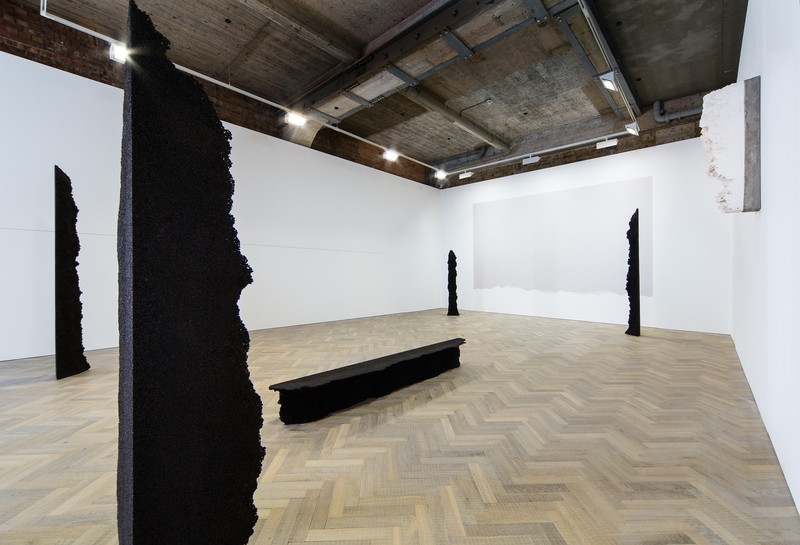 “Michel François’ shift has been, and continues expansively to be, towards the formless, the intangible, the shifting, the rhizomatic, the matrix, the organic.” (Martin Herbert)

Such is Michel François’ practice: ever-changing, unpredictable and malleable, exactly like the materials he favours. Over the years, the Belgian sculptor has ‘touched’ everything: plaster, concrete, metals, ice, clay, wood, neon, glass, rubber, magnets, stone, plants, soap, sand, plastic, polystyrene, glass, sponges, wax, ink, insects... Recently it has been asphalt – such a loaded, loathed and yet such a compliant ‘matière-première’, that François lays down like giant carpets, incrusted with objects, or sculpted in geometric shapes.

For his second exhibition at Thomas Dane Gallery, François will create a whole new environment. The set for a drama about to happen, or which maybe, has just occurred - a field of ruins where broken asphalt columns coexist with collapsed wall fragments and disintegrating bricks, and where the lights will flicker or overwhelm.

François is fond of these contrasts: black and white; noble and mundane; dark and bright; severe and carefree; and above all, a sense of absurd, surreal melancholy - as in “the happiness of being sad”.

François’ sculptures and installations constantly challenge themselves, break apart and find their balance again. They colonise, spread and pile-up. Materials and things become in his hands both antagonists and lovers, contaminating each other and reappearing, years apart.
www.thomasdane.com