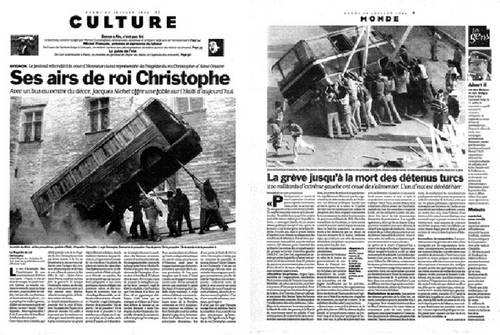 The Directors of Thomas Dane are pleased to present Open-Ended, an exhibition involving the artists, Pierre Bismuth (France, born 1963), Gabriel Kuri (Mexico, born 1970) and Michel François (Belgium, born 1956) who are all connected through being located in Brussels and in their approach to making art. The work of these artists is shaped out of the fluid conditions that form part of their encounter with the world: from the materials of everyday life to the context of the exhibition. Their work is often disruptive yet discrete, giving it an indeterminate quality that demands the active engagement of the audience.

Pierre Bismuth’s work is attentive to the interpretative and mnemonic processes through which cultural images and forms are constructed. In his series of interventions on newspaper, Bismuth ‘doubles’ photographic images found in newspapers by taking the image from one copy of a newspaper and inserting it next to the identical image found in another copy of the newspaper; displacing the underlying text. These works are indefinite as to where they begin, originating in the random encounter with the newspaper as a found object, and are then structured according to a precise logic. This simple act of repetition focuses attention on how the structure of a medium dictates the way we interpret the medium and the 'event' that it communicates.

Michel François describes his artistic practice as being ‘rhizomatic’ in that it consists of a network of different points of connection (photography, sculpture and installation) rather than having a fixed, stable centre. Within this network, François explores many different relationships, including those between ‘culture’ and ‘nature’, mimesis and reality, memory and perception. Here, François presents two versions of his iconic work The Waiting List. The Waiting List is a tabula rasa on which gallery visitors are invited to scrawl their names, thus producing an almost absurd trace of the persons and the time in which the work is experienced. Unfolding through the inscription of different layers of names, this work has no definitive ‘ending’ point except for where the process of inscription has been arbitrarily arrested. By placing a new, blank version of The Waiting List in juxtaposition with a full version, François questions the gap between the work as ‘empty’ and the work as ‘finished’.

Much of Gabriel Kuri’s work is preoccupied with the residues of commerce and social interaction: the sales receipt, the advertisement, the newspaper, the plastic carrier bag, the sticker on goods. In his ‘matter of fact’ yet poetic re-presentation of social ephemera, Kuri focuses our attention both on the content of this information (often consisting of banal slogans) and the material by which it is conveyed. In his gobelin tapestry, Superama (2005), Kuri reproduces a paper sale receipt in the enlarged form of a meticulously handwoven, large-scale tapestry manufactured in a Mexican workshop. Kuri’s beautiful, paradoxical recreation (playing off the laborious time of the artisan against the instantaneous time of the machine) compels us to reflect upon the identity and temporality of the art work as well as upon the wider systems of social transaction in which we are all ensnared.

The exhibition explores the performative as a concept for thinking about artistic activity whereby certain artistic actions coalesce into art works over time as a result of their mode of enactment and their reception. The names inscribed in François’ Waiting List for example, rather than being descriptive, are more akin to performative traces: actions announcing that 'I was here'. For the exhibition, François has made a special series of photographs of people congregating and speaking in Speakers' Corner, Hyde Park, London, the historical site of 'free speech' in England. In doing so, François further meditates on the social and political dimensions of speech acts.

From the chance intervention to the unfinished object, these artists remind us that both making and experiencing art is a matter that unfolds over time.
www.thomasdane.com