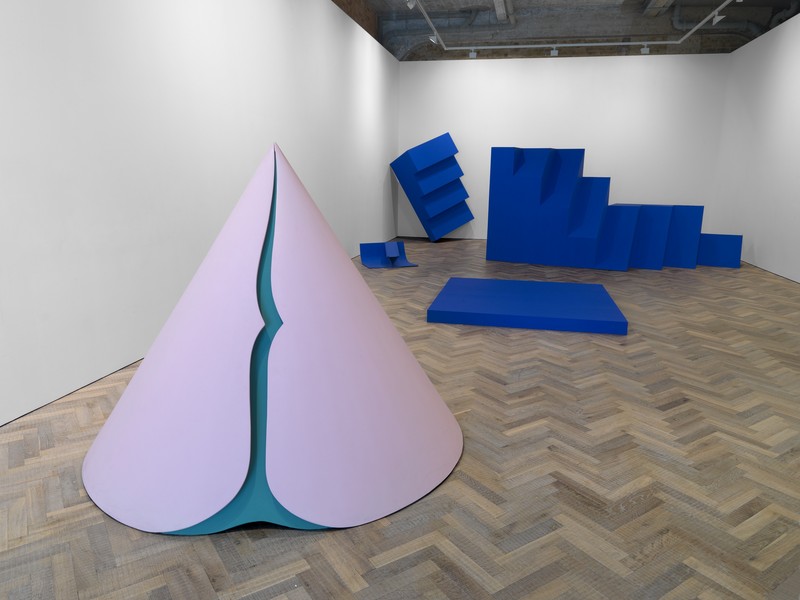 On the occasion of the artist's 80th birthday, Thomas Dane Gallery are very pleased to present our inaugural exhibition of works by Phillip King CBE (b. 1934 Tunis, President of the RA 1999-2004)

Phillip King is the most significant living British sculptor and is one of the key international sculptors of the last 50 years. His work was included in the seminal Primary Structures exhibition at Jewish Museum, New York in 1966 along side Andre, Caro, Flavin, Judd, Morris and Smithson amongst others. King represented Great Britain at the 1968 Venice Biennale (with Bridget Riley) and has also been the subject of ambitious survey shows at Whitechapel Gallery (1968) and Hayward Gallery (1981). Most recently King was exhibited in a remarkable survey show at Le Consortium, Dijon (2013).

King has worked consistently throughout his career in many different media including ceramic, steel, plaster and wood and later also used plastics and PVC. King's larger constructivist forms have incorporated a sophisticated and highly personal use of colour and a poetic, even lyrical, use of form that belie their materials. For his exhibition at Thomas Dane Gallery King will be concentrating on this masterful use and combination of colour and form.

The exhibition will contain some of the earliest works in wood and plaster to emerge from his studio in the early 1960s. These early works employ what King believed to be one of the most primal of sculptural acts: standing two objects on end leaning against each other creating a triangle or apex. These early sculptures will also be joined by recent triangular works that show the development of this idea over his 50 year career. King's 'primal' sculptures are often rendered in unpainted plaster and wood. Their bare materials reveal King's obsession with the very fundamental building blocks of sculpture and the whiteness of the plaster plays a significant role in stripping down sculpture to its simplest form in order to examine it in closer detail.

Alongside these plaster and wood works King will also include two major works from his 'cone' series (an extension of his works with triangles). Rosebud (1967) and Sure Place (1976-7) reveal King's accomplished use of form and materials. The first (Sure Place) is wrought in a brutal, architectural form, made from semi-familiar domestic building materials that create a hut-like structure or hiding place. In the second (Rosebud) King employs the relatively modern material of PVC plastic to create a perfect, delicately coloured surface and allegorical form.

Blue Blaze (1967), one of King's largest indoor works, will occupy most of the gallery space at 3 Duke Street St. James's. It is a multi-part architectural arrangement painted in a bright monochrome royal blue. The work combines shapes inspired by surrealism, classical archaeology and even Lego.

The most recent works in the show (Bottom Pink, 2010 and Untitled (Pink Triangle), 2014) show King's continuing adaptability and breadth as a sculptor. These later works have their roots in the same concerns as some of his very earliest work, namely a fascination with the fundamentals of sculpture and colour, but also display a very contemporary sophistication in their palette and and angular and precise forms. There are echoes of Judd, Caro and even Moore that run throughout King's work but the final objects are unmistakably Phillip King.

Coinciding with the gallery exhibition, there will be an ambitious presentation of King's outdoor sculptures in central London this summer. The exhibition will take place in Ranelagh Gardens, adjacent to Masterpiece Fair, opening at the same time as the fair and extending through July and August. The exhibition will feature key large-scale outdoor works from throughout his career alongside new work. Combined with the exhibition at Thomas Dane Gallery, will be a celebration of a remarkable career that has spanned over 50 years and is continuing to this day.

King is included in the most illustrious public collections in the world including Tate, London; MoMA, New York; Pompidou, Paris; MOCA, LA; Rijksmuseum, Amsterdam and many other.
www.thomasdane.com