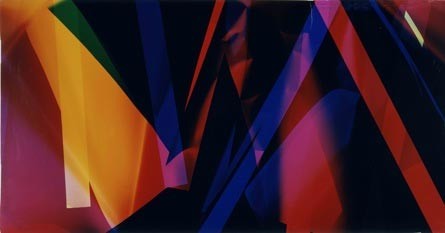 Beshty’s photograms and sculptures explore the nature of both the production and consumption of contemporary art. Only giving aesthetic sensibilities the briefest attention, Beshty is more preoccupied with how the art is made, and how this is evident in the work itself.

His monumental photograms incorporate the camera-less, negative-less photographic process forged by early twentieth century artists Laszlo Moholy-Nagy and Man Ray, who produced their work by placing an object on photosensitive paper before exposing it. In a modern variation, Beshty uses new technologies such as colour processing and large-scale printers, creating unique images by folding, curling and shaping photographic paper and exposing it to different intensities of light. Beshty has also famously left the image-making to chance when he brought photographic paper through x-rays machines at airport security.

With a similar concern for subverting the customary systems of art-production and a continuous reflection on commerce, and the production and dissemination of images and objects, Beshty has worked on various series of 'Fedex Sculptures' since 2005. Originally made with shatterproof glass, the sculptures are designed to fit inside a standard FedEx box. Just as the photograms are material representations of the process of their creation, each journey of a FedEx box leaves its memory on the glass; Cracks and impacts all become part of the sculpture. The process of making the sculptures begins in earnest when FedEx is used in lieu of a professional art shippers to transport the work between artists studio and exhibition space. The more recent FedEx boxes on show are made of copper, and shipped unprotected so their physical journey is even more directly recorded on their surface.

Walead Beshty was born in London in 1976 and now lives and works in Los Angeles. He completed his MFA at Yale University School of Art in 2002, and his BA Hons at Bard College in New York in 1999. The artist has exhibited widely in the New York and London, including the Tate Britain, London and the Museum of Modern Art, New York, both in 2009. He also exhibited most recently at the Hirshhorn Museum and Sculpture Garden.
www.thomasdane.com