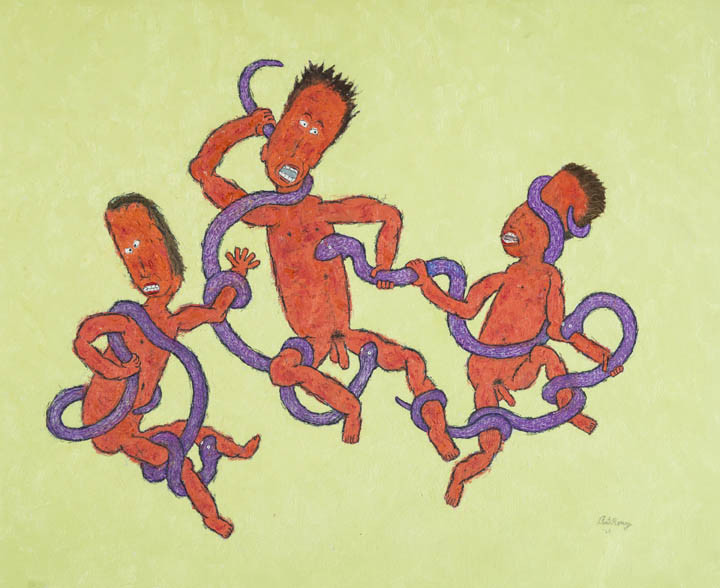 Anthony’s drawings and paintings are critical commentaries on contemporary culture and subtle reflections on the concept of art in form of skewed satire. Combined with naughty and downright perverse fantasies they depict in a witty and pointed comic-like language contemporary historical events, illustrations of the Bible, mythological anecdotes, parodies of World War II, covers of gay magazines or appropriations of works of classic and modern masters. Anthony’s style at first reminds one of the simplicity of children’s drawings but on closer consideration turns out to be calculated and profound. His idiosyncratic style incorporates deliberate mistakes: flat faces without chins and foreheads, stubby fingers and toes. Especially the mistakes and the imperfection liberate Anthony from the restrictions of the classical technique of drawing and painting and allow him to embrace an individual personal style. The pseudo-dilettantism in his grotesque, vulgar and surreal subjects serves as a perfect vehicle for his satirical views on society and its banalities. Mocking the methods of classical figure drawing Anthony’s ironic works not only provoke a smile, the viewer is sure to have a laugh out loud moment more than a few times.

William Anthony is a good example of an artists’ artist. His oeuvre of more than 50 years not only has drawn attention to his fellow artists and friends over the time. Roy Lichtenstein, Japser Johns and Andy Warhol have collected his works. (Warhol’s commentary on Anthony’s Bible drawings: "I can't wait for the New Testament. This is the first Bible I could understand.") Also art critics including Ken Johnson, Robert Rosenblum, Roberta Smith and Leo Steinberg have championed his work. Already in the 90s galleries like Leo Castelli and Pat Hearn in New York exhibited his work. Later his works were also exhibited at Dorfman Projects, New York; Matthew Marks Gallery, New York; Paula Cooper Gallery, New York and Robert and Tilton Gallery, Los Angeles.
William Anthony’s work is held in collections including the Art Institute of Chicago; the Solomon Guggenheim Museum, New York; the Ludwig Museum, Cologne; the Museum of Modern Art, New York and the Whitney Museum, New York.