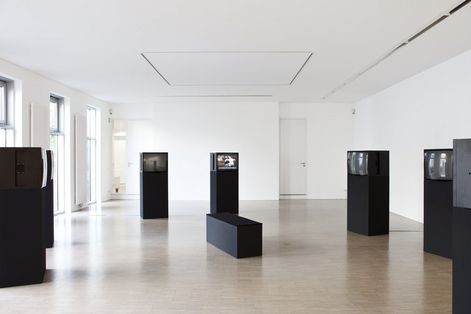 Galerie Thomas Zander is pleased to present "Comrades of Time“ (2010/11) an installation of video and photographic works by the conceptual artist Andrea Geyer. Part of this installation was first shown at Artforum Berlin in 2010. The New York based artist is represented by Galerie Thomas Zander since 2008 and has already mounted a solo exhibition of her internationally acclaimed series “Spiral Lands / Chapter 1” at the gallery.

The title of the new work "Comrades of Time“ is a reference to a text by the art critic and media theorist Boris Groys, in which he interprets the term “contemporary” according to the German translation Zeitgenosse (Genosse meaning comrade) as a comrade of time who is not in time, but rather with time. In Geyer’s work, a group of young women is forming on seven monitors installed as part of a slightly shifted space in the exhibition. The women, who share the same desk, are contemporary in Groys’ sense of the word, they are “Comrades of Time".

For "Comrades of Time“, the artist has worked with seven New York women on historical text passages written by architects, writers, philosophers and political organizers from the vibrant years of the Weimar Republic. Speeches, letters and essays from 1916-1941 are the basis for condensed monologues assembled and composed by Geyer, which her protagonists speak or rather embody in seven distinct videos. The desk is reminiscent of Marcel Breuer’s design for the Bauhaus and represents a link between the young women, suggesting a form of collective work. The voices of the protagonists oscillate between reflection and prophecy, while they speak about the political situation that surrounds them. The viewer is often, if not always actively, addressed as a comrade, friend or colleague. The political imaginary is a recurring theme and quest. The emotional identification and at the same time the alienation from the texts written by Helene Stöcker, Rosa Luxemburg, Alfred Döblin, Elisabeth Sussmann, Walter Benjamin, Alice Salomon, Sigmund Freud, George Grosz and others becomes clearly palpable in the women and their performative embodiment of history. Through this Brechtian rupture the artist is able to build a space of reflection where an individual internalisation of historical and political knowledge takes place.

The Weimar Republic, which reverberates like an echo throughout the work, was an era of a collectively awakening imagination in all parts of society. With looming extremist forces slowly forming and reconstituting, the new forces of the young republic tried to mobilise people by appealing to the capacities of their minds, and their responsibility to the community. By transferring the historical texts to the present time, the linearity of history is broken and the experience of historical times is brought to the present. As in previous works, Andrea Geyer realises an active form of remembrance in the here and now with "Comrades of Time“, abstracted from the particular given contexts. This gesture produces closeness on the one hand, but on the other hand it makes the viewer aware of a distance.

Andrea Geyer (born in Freiburg in 1971) lives and works in New York City. She studied photography, film, and design in Bielefeld and Braunschweig, and participated in the Whitney Independent Study Program in New York. Since 1994 Andrea Geyer has presented her work in numerous solo and group exhibitions in Europe and the USA and especially her contribution to documenta 12, where she presented her series ”Spiral Lands“, received much recognition. Her work is currently on view in New York at the biennial Performa11, in the group show „Walking Forward – Running Past“ at Art in General and at The Museum of Modern Art in January. The New York MoMA has awarded her a research fellowship for 2012. Andrea Geyer's works are in the collections of the Princeton University Art Gallery, the Neue Galerie of MHK Kassel, the Contemporary Art Collection of the Federal Republic of Germany and The Museum of Modern Art, New York.
www.galeriezander.com