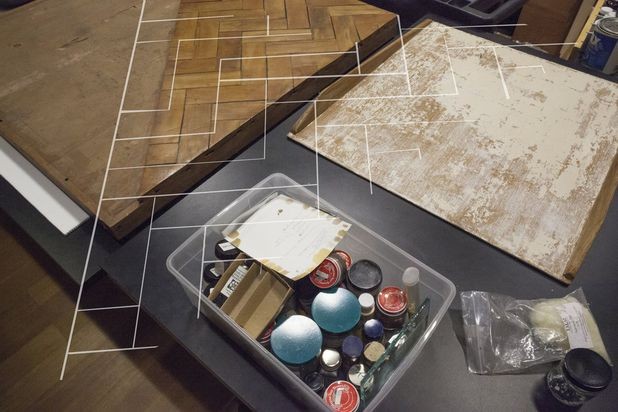 Galerie Thomas Zander is pleased to open this year’s exhibition program with new works by Molly Springfield and Andrea Geyer. In their media-reflexive works both artists explore the pictorial interpretation of time, trace and memory. While Molly Springfield’s medium is drawing, Andrea Geyer uses photography and video.

Molly Springfield (born 1977, lives and works in Washington, D.C.) shows her installation This document from 2014. With these drawings, she responds to one of the most influential texts of art theory by Conceptual artist Douglas Huebler that was published in Lucy Lippard’s groundbreaking study Six Years: The dematerialization of the art object from 1966-1972. For her work, Springfield selected a short passage from the text and depicted it in twenty large format sheets. En detail she draws fragments of the sentence from a photocopy of the book page. The graphite drawings do not only reproduce an excerpt from the text, but they are complete with marginalia, underlinings and page creases left on the pages in the processes of reading and photocopying. Enlarged 400 percent and abstracted through the fragmentation, the material and pictorial qualities of text and language itself come into focus.
Douglas Huebler’s passage describes his own central notion and elucidates his artistic strategy when he writes: “The world is full of objects, more or less interesting; I do not wish to add any more. I prefer, simply, to state the existence of things in terms of time and/or place.” Parallels to Molly Springfield’s artistic approach become apparent as she seems to make the photographic reproduction of an original the subject of her meticulous drawings. This reading of her work would be too short-sighted though, because it is not a random copy of the book, but the artist’s personal copy, the notes and underlinings are hers. She already read the book toward the end of her college years, a fact which prompts the idea that to her this is not merely any book on art theory, it offers a key to her art. In This document a historical source congeals into personal memory.
Especially in the United States, Molly Springfield’s work has been shown in many solo and group exhibitions and her works are in the collections of renowned institutions like the Whitney Museum in New York.

On the Second Floor, three work groups by Andrea Geyer (b. 1971, lives and works in New York City) are on view, which were created during a research fellowship and commission at the Museum of Modern Art in New York. Past Strangers (2014) is a series of photographs taken at the Museum of Modern Art’s Painting and Sculpture Conservation Lab. The photographs depict various artworks from the museum’s collections while they were in the lab for inspection. By taking the artworks out of their auratic, historically determined exhibition space, Geyer’s photographs open up new perspectives that show the world-famous works uncovered, without frame or pedestal, primarily emphasizing their materiality and visual language. Geyer thus highlights the genuinely artistic attributes of the works and reveals the extent to which the viewer usually relies on the stylized cultural or contextual meaning predetermined by the historicization of the works. Some of the photographs are framed under engraved glass. This intervention lends an additional sensibility to the perception of the represented artworks and offers the viewer a new and unfamiliar experience.
Three Chants Modern and Indelible (Armory Show) investigate the history of women in the establishment of modernism in America. In 50 ink drawings Indelible lists the names of the 50 women who participated in the famous first Armory Show of 1913. This work sets a powerful monument to the women among the 300 artists presented at the show. In Three Chants Modern, too, important female figures of the 1920s and 1930s are at the centre of a successful network engaged in the areas of culture, society and politics. They are still known today for their involvement in the foundation of major museums, including Abby Rockefeller, Lillie Bliss and Mary Sullivan (MoMA), Gertrude Vanderbilt (Whitney Museum) and Katherine Dreier (Société Anonyme). Andrea Geyer’s two-channel video installation reflects on these relationships in the context of the contemporary museum. Her work also recurs to well known and celebrated works by other artists, which function as historical blueprints in the video that sharpen the perception of the present. For this film, the artist expands her oeuvre to incorporate dance and music for the first time. In these three most recent work groups Geyer continues her ongoing investigation of time, history and the manifestation of a complex present.
Andrea Geyer’s works are collected by major institutions, including the Museum of Modern Art in New York and the Whitney Museum, and have been shown in numerous acclaimed exhibitions. In 2007 she already received wide recognition for her participation in documenta 12.

A limited-edition leporello is published coinciding with the exhibition Molly Springfield This document.
www.galeriezander.com