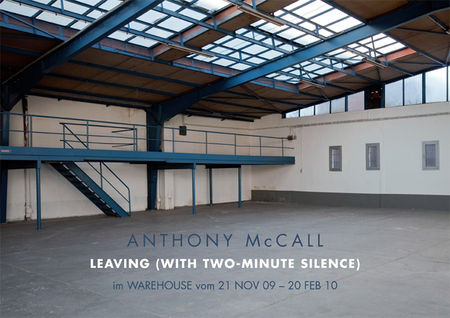 The opening reception takes place at the WAREHOUSE on Saturday, 21 November, at 4 pm.
The artist will be present at the reception.
Introduction: Dr. Harald Falckenberg

Galerie Thomas Zander is pleased to announce an exhibition of works by British film- and light artist Anthony McCall. At the gallery’s newly opened WAREHOUSE, McCall’s large-scale light installation “Leaving (With Two-Minute Silence)“ is presented, which was first shown at Art Unlimited / Art Basel this year. Drawings for recent projects and early film installations are on view at the main gallery space. In the future, the Cologne WAREHOUSE will function as an open storage, show room and project space for temporary exhibitions.

Anthony McCall (born 1946), who recently won a commission for an outdoor sculptural installation in the Liverpool Docklands for the “London 2012 Cultural Olympiad“, has worked in the medium of film since the early 1970s, considering aspects of space, architecture and time in his investigations. The works of the New York based artist are drawings, films, installations and mobile sculptures at the same time, which explore and expand the relationship between the spectator and the work of art. The motivation for his light installations are drawings, for the realisation McCall uses the medium of film and the effect that the installations create is sculptural. In the film, the outlines of a two-dimensional form are gradually developed and projected through a beamer into a room filled with mist. As the beam of light is caught in the mist, a sculptural installation is generated by light, which slowly grows and moves with the evolving line in the film.
Completed this year, the presented light-installation is “Leaving (With Two-Minute Silence)”. The piece consists of two, spatially parallel, projected forms. The first form starts as a complete ellipse, which is systematically cut away until nothing is left. The second form starts with nothing and systematically grows into a complete ellipse. The sonic environment operates as a just-audible ‘shroud’ which is built from two opposing sound-spaces: the traffic of the city emerging from one side of the space, the liquid sounds of a city harbour from the other. At one moment during each cycle, the motion freezes and the sound vanishes, to produce a transient moment when time stands still.

Parallel to the light-/sound installation at the WAREHOUSE, drawings and installations by the artist are presented in the gallery. The drawings belong to a series of studies for his latest projects such as “Projected Column“ for the Liverpool Docklands and “Crossing the Hudson“. Also on view is a wall installation of 36 stills from the recent solid light film “Between You and I“ (2006) and the photographic series “Water Table“ from 1972. The three early experimental films “Landscape for Fire“, “Landscape for White Squares“ and “Earthwork“ (1972), originally shot in 16mm, document a series of large-scale, outdoor, sculptural performances based on a grid of small fires that generated repeatedly changing configurations. These works mark the beginning of McCall’s serious interest in the medium of film.

Especially in the last few years, Anthony McCall’s film and light installations have become a highlight of the international art scene. His work has been exhibited at major international institutions including the Museum of Modern Art New York, the Centre Pompidou in Paris, the Tate Britain and the Serpentine Gallery in London. A group of six vertical installations was on view at the Hangar Bicocca in Milan this year. Currently, the Moderna Museet in Stockholm is showing a selection of McCall’s light installations and drawings. The artist’s oeuvre is accompanied by numerous publications.
www.galeriezander.com