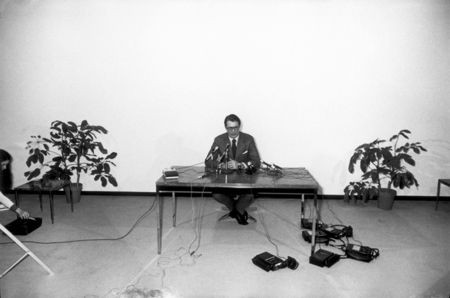 Galerie Thomas Zander is pleased to present “Public Relations“, an exhibition featuring works from the influential series by American photographer Garry Winogrand (1928-1984). On view are his photographs of election campaigns, press conferences, of rallies and strikes in New York City, museum openings, receptions and other public and private events of the American society in the 1970s. “Public Relations“ is the outcome of a photographic project begun by Winogrand in 1969 when he was awarded a Guggenheim Fellowship to photograph what he called “the effect of media on events.“ The rituals of a society eager for publicity, which historian Daniel Boorstin describes as “pseudo-events,“ fascinated Garry Winogrand. What these events had in common for him is that they are created as much for the sake of the media as for self-promotion. The photographs depict the emerging hype of a society in the 1970s that indulges in celebrating itself and in which the presence of the media becomes more and more important in public life. With this series, Winogrand was not only able to capture the spirit of that particular time, he also pinpointed a development that today is more relevant than ever.

Like Diane Arbus and Lee Friedlander, Winogrand discovered the street as an exciting and creative territory for photography in the 1960s – inspired by the work of Walker Evans, who had already begun to photograph people in the streets in the thirties. In the workshops of the acclaimed art director of Harper’s Bazaar, Alexey Brodovitch, Winogrand was taught the principal rules of the modern street photographer: to trust your own perception rather than emulate a standardised style of composition, to approach a situation with your instinct rather than your knowledge, to work with natural light and to accept pictures that were slightly out of focus – rules that perfectly suited his own way of working. With an insatiable appetite for images, Winogrand spent his days in the bustling streets of New York, on the highways of the United States or at the parties of the upper crust. Always looking for unconventional portraits of personalities of the time or for pictures of confident young women in New York and Beverly Hills, which he put together in his celebrated series “Women Are Beautiful.”
His tireless energy, his nervous and restless obsession for photography, which drove him through the streets of New York, did not desert him when he was travelling. What did change, however, was his perspective. Winogrand no longer photographed as a pedestrian, but as a driver, a traveller (many shots were taken from his car window). He no longer worked in the crowded streets of Manhattan, but in the wide American landscape. Yet the resulting photographs were not fundamentally different: With remarkable dexterity, Winogrand’s skilled photographic eye caught countless moments in images. He created those characteristic photographs of people in public spaces, photographs, in which the boundaries between humour and melancholy, loneliness and sociability, beauty and ugliness seem to dissolve in an astounding way. Even thirty to forty years after they were first published, these images have lost nothing of their initial excitement, their enormous aesthetic and narrative potential and their freshness. Many of these images have now become classics of photography and documents of our recent history.
www.galeriezander.com