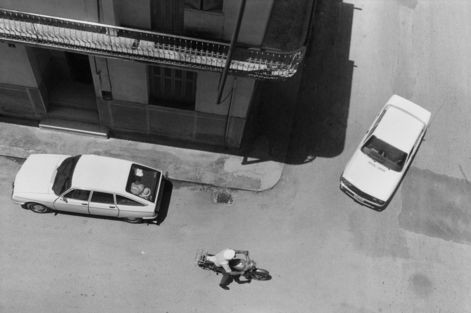 Galerie Thomas Zander is pleased to present the first exhibition of little known black and white prints of the influential American photographer Garry Winogrand, made during his travels in Europe between 1969 and 1982. Inspired by the documentary aesthetic of Walker Evans and Robert Frank, Winogrand (1928-1984) developed an inimitable visual language of calculated restlessness and followed the principles of the modern street photographer: trusting one’s own perception rather than trying to emulate an established ideal of composition, working with natural light and accepting that pictures were sometimes out of focus. Photographing in the streets of Manhattan, on the highways across the USA, or at the parties of the upper crust, he created an oeuvre, which as early as 1967 was included in the seminal group show New Documents at the Museum of Modern Art in New York alongside the works of Diane Arbus and Lee Friedlander.
On view are photographs from Greece, Paris, London, or Kopenhagen where Winogrand’s familiar perspective changes. While he moved with the crowd in his native New York, in Europe he becomes a traveler among travelers. The images often show tourists, flâneurs, and backpackers taking souvenir photographs, exploring the cities or taking a rest in the shade of architectural landmarks. The photographs, however, are not fundamentally different: Winogrand created those characteristic images of people in public space, images, which seem to dissolve the boundaries between humour and sadness, loneliness and sociability, beauty and ugliness. In the European capitals, the viewer even recognizes some of the confident protagonists of Winogrand’s celebrated series Women Are Beautiful.
Many of Garry Winogrand’s images have become icons of photography and documents of contemporary history. Since the 1960s his works have been the subject of numerous international exhibitions and publications. The San Francisco Museum of Modern Art presented his most recent retrospective this spring, which will travel to the Metropolitan Museum of Art in New York and the Jeu de Paume in Paris in 2014.
www.galeriezander.com