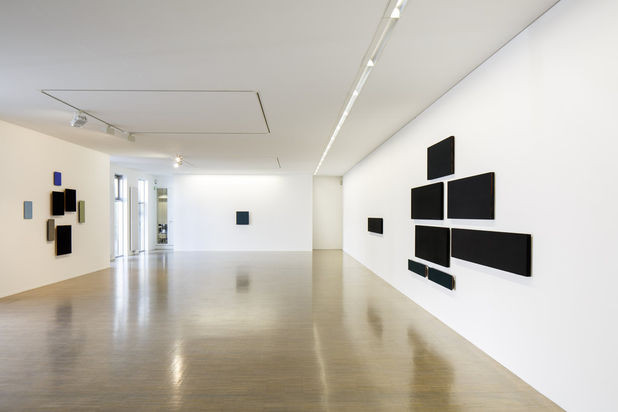 On the occasion of this year’s gallery weekend, Galerie Thomas Zander is pleased to present two artistic positions at the gallery for the first time. While a rich selection of photographs from Peter Hujar’s Night series is exhibited in the Second Floor, the artist Günter Umberg shows paintings from his group of works Territorien in dialogue with works from his current creative period.
Territorien are individual paintings installed at precisely measured distances to each other on the wall, turning the exhibition into a space of perceptual experience. The new piece Bild 1 Länge – Breite – Höhe – Tiefe consists of several parts, all aligned horizontally. The title is reminiscent of a coordinate system and thus alludes to a place, which however is not further determined. On the other hand, it refers to the many-layered philosophical discourses surrounding Günter Umberg’s work: Those discourses are the outcome of thorough investigations and experiences, ranging from medieval philosophy to the theories of Gilles Deleuze and Félix Guattari. In the Territorien the single paintings can be perceived as “individuals“ and simultaneously as parts of a community, where each object has been assigned its place, which it occupies, yet also seeks to escape from. This creates relationships positioning the viewers by means of their presence within the space vis-à-vis the Territorien, which oscillate between fixation and detachment until even the space seems to transform. Finally, seemingly assured territorial borders blur and hierarchies vanish, colours appear to dissolve and the works gain a new and unforeseen visibility, embodying art in its purest form. A further fundamental aspect of Günter Umberg’s work is his profound knowledge of painting as a medium, which he translated into a contemporary context and radically redefined with reduced means. From these considerations, his own distinct form of painting emerged, characterised by his acutely contemporary approach to painting without loosing sight of the traditional means of the medium. Through the materiality of their pigments the sheer presence of the colours engenders an effect of depth pulling the viewer in. The densification of colour leads to a transformation of the material, so that the paintings appear as if energetically charged. Günter Umberg himself describes his radical monochrome painting as follows: “My painting does not demonstrate, but gives room to an excited perception.“

SECOND FLOOR: Peter Hujar was born in Trenton, New Jersey in 1934 the son of Ukrainian immigrants. At the age of 15, he moves in with his mother in Manhattan’s East Village and in 1948 takes up his studies at the School of Industrial Art (today called the High School of Art and Design). He completes his education with a training in commercial photography. Since 1966 Hujar works as a fashion photographer for Harper’s Bazaar thanks to a recommendation from Richard Avedon. Yet he soon decides to move away from commercial photography and in 1969 opens his own studio, which gives him the freedom to devote himself to other subjects. His portraits of artists and musicians from New York’s Bohemia are particularly impressive. In the 1970s and early 1980s Hujar moves in artistic circles in the Lower East Side, of which he was a major figure, and maintained close relationships with Paul Thek or Andy Warhol among others. He was admired by fellow artists like Nan Goldin and Robert Mapplethorpe, even the critic Susan Sontag, but never experienced economic success, which came only after his death in 1987. His attitude was always uncompromising and clear – in life as in art. This brutal candour and honesty is also reflected in his photographs and often lends an empathetic, excessive and at the same time sombre and melancholy quality to his portraits of various personalities of the New York scene. Hujar’s unconventionally beautiful night shots of the New York piers and street scenes of the nocturnal demimonde are especially intriguing and are often reminiscent of Brassaï’s photographs of Paris by night. These images from a time before the onset of the HIV epidemic and the gentrification of Downtown show a lost place, which was hidden from most people’s eyes at the time and now – since it has disappeared – has become legendary.
www.galeriezander.com