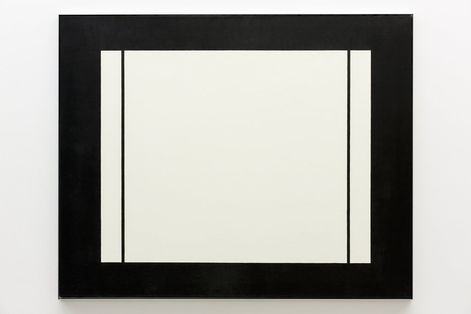 Galerie Thomas Zander is pleased to announce two exhibitions of selected early paintings by John McLaughlin and photographs from Studio 54 in New York by Tod Papageorge.

John McLaughlin (1898 Sharon, MA - 1976 Los Angeles, CA) is regarded as one of the most important American artists of the mid-twentieth century, although his work was widely acknowledged only towards the end of his career and received more attention especially during the past few years. McLaughlin is the most prominent of the “Hard Edge” painters of the late 1950s, who formed a counter movement to the emotionally charged Color Field painting of Abstract Expressionism. McLaughlin holds a singular position among this group of artists in that his artistic vision is grounded in Zen Buddhist philosophy, which influences his aesthetics. His abstract images are characterized by clear geometric compositions of few color sections. Especially in his reduced paintings of the 1950s and 1960s with their “neutral structure” (John McLaughlin) this influence becomes visible in the void, which viewers may fill with their individual experience of the present moment. His ways of thinking about art helped shape the style of the art scene on the American West Coast and represent an ongoing influence on contemporary artists until today.

On the Second Floor, Galerie Thomas Zander presents its first exhibition of works by the American photographer Tod Papageorge. On view is a series of seventy black and white photographs from the legendary New York night club Studio 54, that was frequented by the likes of Andy Warhol, Liza Minnelli, Mick Jagger and Grace Jones. Papageorge always had his camera at hand and between 1978 and 1980 he celebrated with the rich and beautiful, the artists and starlets; even today viewers can witness the eccentric and hedonistic party nights in his photographs. They revive the feeling of the disco era and express a profoundly urban spirit of directness, which condensed in New York at that time.
In the 1960s, Tod Papageorge had a close artistic exchange with Garry Winogrand. Both artists used to meet almost daily to take photographs in the streets of New York. During those days, some icons of photography history originated, which with their intuition and intensity exude a unique kind of lightness. As a recipient of two Guggenheim Fellowships and a teaching professor at Yale University for many years, Papageorge’s influence on contemporary photography can hardly be overestimated. Renowned photographers like Philip-Lorca diCorcia, Gregory Crewdson, or Anna Gaskell were among his students. All of Tod Papageorge’s works are based on an interest in people as social beings. Be it his images of sports stadiums, his photographs of everyday life in Central Park or the images from Studio 54, in all his photographs people are characterized through the group they belong to and their experience of the present moment. His works are intense portraits of America marked by a powerful authenticity.
www.galeriezander.com