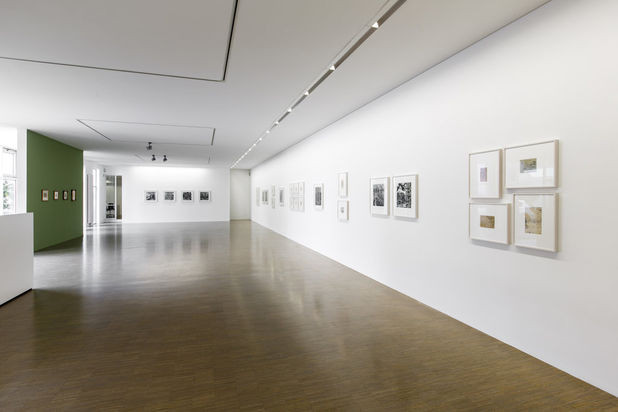 Galerie Thomas Zander is pleased to present the first exhibition of landscape representations by Lee Friedlander and Pierre Bonnard in dialogue. The exhibition focuses on the photographic gaze across different eras and media: while Lee Friedlander (b. 1934, Aberdeen, Washington) works directly in photography, the French artist Pierre Bonnard (1867, Fontenay-aux-Roses - 1947, Le Cannet) makes use of fundamental aspects of the photographic gesture in his drawings. For both artists, landscape is a central subject in their oeuvres.
For more than fifty years, Lee Friedlander has photographed cities, landscapes and street scenes as manifestations of American life. Seen through the photographer’s eye, the anonymous landscapes become places whose character appears meaningful through the subjective choice of framing, even though the images reveal only fragments of reality. The compositions, which interweave contrasts and shadows, create complex structures charged with a tension that is never resolved.
Like Friedlander, Pierre Bonnard also found his subject matter in nature. He made many of his drawings as “snapshots” of the South of France and they later served as sketches for his post-impressionist paintings. In the works of both artists, capturing the landscape seems akin to discovering it, while the fragmentary quality functions as part of an overarching artistic vision. Beyond that, what links the two artists is their unconventional and authentic style, that generated unadorned landscapes of their respective home countries and images of lasting significance, leaving the viewer with the impression that they have seen things with their own eyes.

The exhibition on the Second Floor is dedicated to four iconic portfolios edited by Lee Friedlander at the Double Elephant Press, New York, from 1973 to 1974. Featuring Manuel Álvarez Bravo, Walker Evans, Garry Winogrand, and Friedlander himself, they bring together some of the most influential photographers of the twentieth century. The four limited edition portfolios each contain fifteen photographs, distilling the artists’ distinct visual languages that can be described in the words of Walker Evans as “oddly refreshing, unselfconsciously striking, and unpredictably adventurous.” This exhibition honours the unique collaborative project that was to become a touchstone in the history of photography. Its title, Double Elephant, is a synonym for materials of the highest grade, which were selected for the production of the portfolios.
By the mid-1970s, photography had gained momentum in the art world and had arrived in the museums, galleries, and universities. The photographs on view in this exhibition represent important steps in this process. In 1967, for example, the works of Friedlander and Winogrand were part of the exhibition New Documents at the New York MoMA, which coined the name of a new approach to documentary style photography. Very aware of the medium’s artistic means, the photographers devoted their practice to everyday, personal subject matter. If documentary depictions had formerly been motivated by a social agenda, these artists observed the world and human behaviour. The exuberant energy in Winogrand’s photographs as well as Friedlander’s laconic compositions are reminiscent of Walker Evans’ formative influence on the visual culture of America since the 1930s, when his work was exhibited in the first one-man show of a photographer at the Museum of Modern Art. It is with a surrealistic impulse that Evans’ contemporary, the great Mexican photographer Manuel Álvarez Bravo, portrays the experience in his country in an intimate yet transcending way. Their works are at once clear and ambiguous, and thus they are able to convey the inextricable contradictions of modern life, the search for truth and the longing for poetry.

The exhibition Double Elephant is accompanied by a publication produced by Steidl.
www.galeriezander.com