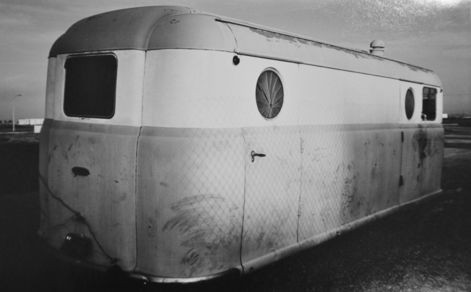 Next to Bernd and Hilla Becher, Stephen Shore and Henry Wessel, Lewis Baltz is one of the most prominent representatives of the New Topographics movement, which was seminal to the development of conceptual photography. Baltz, as well as Donald Judd, were among the artists whose works were shown in the 1970s at the New York gallery of Leo Castelli. The current exhibition at Galerie Thomas Zander now brings together these two artists for the first time, creating an exciting interaction between oeuvres characterized by a minimalist use of forms and imagery.

Baltz's photo series document the side effects of industrial civilization on the landscape, focusing on places that lie outside the bounds of canonical reception: urban wastelands, abandoned industrial sites, warehouses. His photographs uncover the correspondences between spatial forms that occur in the everyday world and advanced forms found in art. Baltz's strategies imply a reflexive knowledge of the history of photography in that they deploy the photographer as a teacher of seeing who makes things visible through reductive gestures. He already turned in the mid-1960s towards a reduced, minimalist-style aesthetic, orienting himself on artists in the fields of painting, sculpture and Land Art. The autonomous presence of the work of art was declared the guiding principle. "The work exerts its own existence, form and power. It becomes an object in its own right," as Donald Judd describes it.
Together with a number of wall objects, sculptures and early drawings by Donald Judd, the exhibition will show early Baltz photographs from The Prototype Works and from the 25-piece The Tract Houses that were first exhibited in 1971 at Leo Castelli. The two series are among his earliest projects, which broke with mainstream photographic traditions to reveal pronounced modernist references. Baltz manages in his work to extend the notion of the documentary; he "emphasizes the paradoxical position of photography within the art history of its time" (Sheryl Conkelton).
Baltz's minimalist and reduced image compositions explore the photographic style as a process, and refer not only to the art of photographers like Lee Friedlander or Robert Frank but also to painters and sculptors of his day such as Donald Judd, Frank Stella, Jasper Johns or Sol LeWitt. Convergences are to be found in his formal and aesthetic compositional patterns as well as in the content he fixes on, which Baltz subjects to a highly critical analysis, without however losing sight of essentials. The focus is on universal aspects instead of particularities, as expressed above all in his "Prototype Works".

Born in Newport, California, in 1945, Lewis Baltz studied photography at the Art Institute in San Francisco from 1966–69 and went on to hold various teaching positions and professorships in the 1970s. He still teaches today, at the Istituto Universitario di Architettura in Venice, where he lives and works, while also maintaining a home in Paris. At the young age of 26 he had his first solo exhibition of photographs, at Leo Castelli in New York. In 1975 Lewis Baltz then took part in the "New Topographics" exhibition at George Eastman House. Since then, his works have been featured in numerous international solo and group exhibitions, and they are included in various important collections worldwide. This year, Baltz's works will be on view at at MOCA Museum of Contemporary Art, Los Angeles, the San Francisco Museum of Modern Art as well as at the LACMA, Los Angeles. September will see the opening of a solo exhibition at the Art Institute of Chicago, and the National Gallery of Art in Washington DC will also mount a solo show from April to July 2011. All German publications on Lewis Baltz were published by Steidl Verlag.
www.galeriezander.com