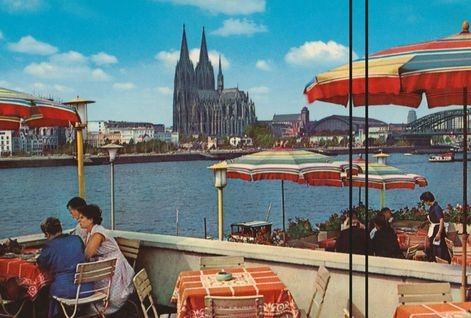 On the SECOND FLOOR, early photographs by Peter Downsbrough are shown along with a re-installation of his first one person exhibition at the PS1 in New York in 1980. These photographs, which were already taken in the 1970s, depict views of New York City. Their seemingly documentary quality reflects the representation of urban space by means of an impressive visual language on the formal level, invoking both minimalism and conceptual art.
As Peter Downsbrough put it himself in the press release of 1980: „The photographs will look at the situation.“ In this statement the artist describes an integral part of his work: the exploration of the relation between work and space within a specific architecture. At the PS1 Downsbrough installed his photographs using black duct tape, which he attached to the windows. This created the impression of the tape casting a shadow onto the photograph on the opposite wall, when in fact there was an actual lamppost in the photograph. In the site-specific installation, the photographs form a coherent unit with the architecture of the space, enabling the artist to investigate both real and represented space on a discursive level.
Since the 1960s Brussels-based Peter Downsbrough (born in New Jersey in 1940) has been an important figure in contemporary art, associated with minimal art, conceptual art, and visual poetry. In his artistic work he explores various fields including sculpture, photographs and photographic series, postcards, collages, and artist’s books, revolving around the central topic of space. Like Victor Burgin, Downsbrough uses language in his photographs to engage in new discourses on a theoretical and visual level.
www.galeriezander.com