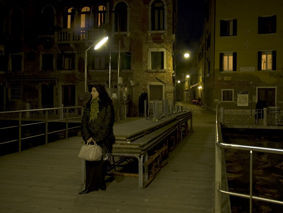 
The exhibition SEEING DOUBLE features two works of different genres from each of the participating artists Lothar Baumgarten, Victor Burgin, Anthony McCall, Larry Sultan / Mike Mandel and Mark Thompson. On view are video / film works and slide installations in combination with photographs / works on paper from the 1960s to the present. The exhibition title refers to the presentation of two different types of media, still and moving images, while also pointing to the conceptual approach of the artists: the reflection on forms of visual representation and the context of art. The viewer is encouraged to consider a multilayered perception ... SEEING DOUBLE.

The internationally renowned artist and Beuys student Lothar Baumgarten (born in Rheinberg in 1944, lives in Berlin and New York) presents the slide installation Unsettled Objects,1968-69, which was part of his exhibition American Invention at the Guggenheim Museum New York in 1993. The work allows detailed views into the world of glass cabinets of the ethnographic collection at the Pitt Rivers Museums in Oxford. It brings together texts from different authors reflecting Baumgarten’s discourse on the Western practice of the appropriation of that which is "foreign". The 48 page artist’s booklet T’E-NE-T’E (1972-74), 1974 published by Konrad Fischer, is a "mythologische Vorführung" (mythological presentation) in sequences of images and texts examining the significance of the eagle in the mythology of the North American Indians and in relation to art and science. In his mostly temporary wall installations, Baumgarten uses written language as a medium of memory. Through the use of language and images, he transfers terms and expressions from ancient or unfamiliar cultures to the context of the contemporary art scene.

Victor Burgin (geb. 1941 in Sheffield, England) has worked as a conceptual artist and theorist for more than thirty years. His works are collected by major international institutions including the Museum of Modern Art in New York. The exhibition SEEING DOUBLE presents Performative/Narrative from 1971, a work consisting of 17 panels. Like the majority of his works from the 1970s, Performative/Narrative combines photographic sequences and texts, and focuses on the relation between the semiotics specific to texts and images. The video work Alle otto. Solito Posto (digital video loop, 12 m 35 sec to reprise), which Burgin completed this year, has recently been shown simultaneously at the Museo Fotografia Contemporanea in Milan and the Galleria Bevilacqua La Masa, Venice. Through intertitles, images and a voice-over it invokes the two cities as the setting of a love relationship that has come to an end. In his video works, which since the 1990s have extended his work, Burgin directs the viewer’s gaze to the real world – seen through a prism of narrative, memory and fantasy.

Anthony McCall (born in St. Paul's Cray, England in 1946) has worked in the medium of film since the early 1970s and deals with questions of sculptural space and time. The works of the New York based artist are hybrids of performance and experimental film, which explore and expand the relation of the spectator and the work of art. The early slide installation Miniature in Black and White (1972) was the first work of art McCall exhibited in his career as an artist. In its year of origination it was exhibited at Gallery House in London, in 2004 at the Centres Georges Pompidou / La Maison Rouge in Paris and most recently in McCall’s retrospective at the Musée départmental d'Art contemporain de Rochechouart, France and at the Serpentine Gallery in London. In addition to Miniature in Black and White, SEEING DOUBLE showcases graphite and pencil drawings, which are studies for his latest installations Projected Column and Crossing.

The American artists Larry Sultan (born 1946) and Mike Mandel (born 1950) have worked on collaborative projects for more than thirty years, while also pursuing their individual artistic paths. In the mid-1970s the artists received a grant from the National Endowment for the Arts, and embarked on an extensive research project in the image archives and files of American corporations, government agencies and research institutions. They selected a group of photographs which were originally used purely as documentary material. Taken from their actual context, the images raise questions about authorship, the inherent meaning of artefacts and their relation to art. In 1977 Sultan and Mandel published the book Evidence, which contains a selection of the photographic prints they had accumulated. The 33 vintage prints which served as master prints for their artists’ book are on view in the exhibition. During their research for the Evidence project they also produced a 16mm colour film (14 minutes). The film fell into oblivion shortly after the project was finished and it was only this year that it was rediscovered in the archives of the artists. In the exhibition SEEING DOUBLE the film will be shown to the public for the first time. Similar to the photographic series, the film assembles clips of documentary archive material found in research and control centres into a compendium that apparently lacks any frame of reference.

Mark Thompson (born in Fort Still, Oklahoma in 1950) is an installation artist whose experimental, sculptural environments and performances explore the relationships between natural processes and human activities over time using the resources directly related to a particular site. Often these include such natural elements as honeybees, beeswax, water and sunlight, as well as the social, historical and physical resources of the human communities. Drawing on a long history of interdisciplinary investigations in biology and physics, his work uses a wide range of materials and site resources along with film, video and live performances. Since the 1970s, the artist has studied and worked with bees. He sees the honeybees as a metaphor of systems of communication and the complex, intricate workings of life. The 16mm colour film Immersion, produced between 1974 and 1976, and the 36 colour photographs Immersion Score (1976-1979) document a swarm of bees gradually and almost completey covering the artist’s head, neck and chest. The work tests the limits of the viewers’ imagination and proposes an extended concept of art in the alliance of human being and animal. Immersion will also be on view in the group exhibition The Third Mind: American Artists Contemplate Asia, 1860-1989 at the Guggenheim Museum in New York from January 2009.
www.galeriezander.com