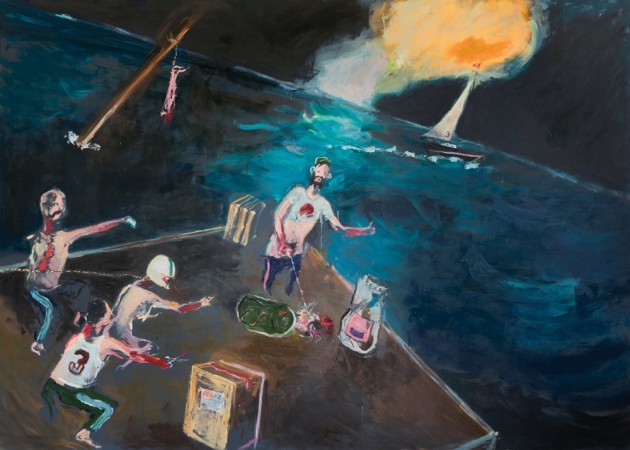 Aaron van Erp's morose humor is channeled into haunted paintings. The artist’s portrayal of a reflection of a disconcerting atmosphere has never been more potent. His works often displays random acts of surreal violence as in "Victory, an oil rig painting", or in "Champagne socialist Russell Brand and Friday against Madame Kurtz and her soup kettle". The partially rendered figures are put into contrast beside the numbers, bright flags, helmets and sport attire. His gruesome scenes take place in the artist signature dystopian environments, which take the form of deserted beaches and isolated interiors which are made even more absurdly surreal by the random placement of objects such as a table tennis table, or a FedEx crate.

Van Erp draws inspiration from Joseph Conrads 'Victory: An Island Tale' and 'Heart of Darkness", which he has reworked into imagery reminiscent of Venetian Masters such as Tintoretto and Titian, and can be found here in the artist ocean motifs. His social and political commentary is akin to that of Francisco Goya, who also produced works denouncing violence, constraints on freedom of thought, and human suffering.

The punk metal band Haatbaard, for which Aaron is the front man and singer will be the subjects of a series of portraits for the first time.