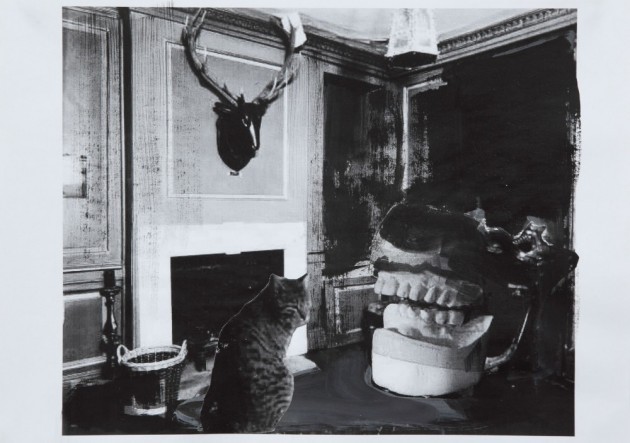 Tim Van Laere Gallery is pleased to present an exhibition of works on paper by Adrian Ghenie.
Staking out an area between painting, collages and recently even a three-dimensional installation (The Dada Room), Ghenie's work draws from source material ranging from personal narratives, to historical references, to popular culture (e.g. Laurel and Hardy, slapstick), to artistic connotations (e.g. the Dadaists, the renaissance painting). For Ghenie this source material is part of our collective memory. The artist arranges elements from this collective memory into new compositions, creating visual gestures that feel familiar yet eerie to the experiencing subject. According to Ghenie, it is only through the juxtaposition of these images that new symbolic meanings emerge. Moreover, a powerful compositional contrast is established that bypasses the spectator's consciousness. "Nothing is really interesting in itself. It's the psychological tension and the contrast, created by the artistic intelligence, that generates the meaning", the artist states.
Ghenie's work is often characterized by dramatic atmospheric sets and weird tensions, echoing the visual language of film directors such as David Lynch, which is not arbitrary: "my fetish for cinema makes me dream of being a filmmaker with a brush in my hand". Ghenie integrates the element of collage into his work. The added layering and abstract elements augment the artworks' complexity.
Adrian Ghenie was born 1977 in Baia-Mare, Romania; he lives and works in Cluj and London. Recent solo museum exhibitions include at the MNAC Bucharest (2009) and at S.M.A.K. in Ghent (2010).
www.timvanlaeregallery.com