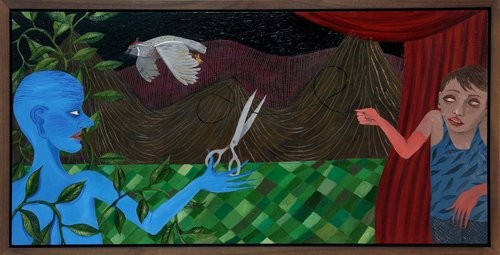 Ed Templeton (°1972) documents his life, and the lives of the people around him, in a rich stream of images - images of himself and his wife, Deanna, in their day-to-day lives, and images of others (usually youths), at home in Orange County (California), or during the many tours he makes as pro-skateboarder and artist. Photography is a significant constant in his work, but, in recent years, paintings and drawings have started to take an ever more prominent place in the oeuvre.

Templeton likes to present his photos, drawings and paintings in a non-hierarchical manner, large quantities all mixed up together at once. He’ll often hang clusters of works in the shape of “image clouds”, against a coloured background on which are yet more painted clouds. In these installations, the to and fro of the clouds feels like a metaphor for the appearance and disappearance of images, like those of a traveller acquiring countless new impressions every day. In Templeton’s way of seeing we also recognise something of the fascination of the passer-by, the transient, gripped, at some unexpected moment, by the “extraordinary of the ordinary,” the exceptional and surprising existential qualities of daily life.

Raised in the “New World”, his photographic work shows him to be, primarily, a chronicler of both the day-to-day life of urban American youth and the not-so-day-to-day life of the, frequently very young, touring pro-skateboarders. Sexuality and vulnerability are recurring themes and the way in which they are portrayed is a testament to deep empathy: “Nothing human is foreign” seems to be the motto. It is fascinating to realise that, probably, it is precisely this humanist glance that gives these images that not-so-day-to-day quality.

Human vulnerability is also an important theme in Templeton’s paintings and drawings. This particularly applies to the works populated by zombie-like human figures, who seem to have escaped from some medieval tableau of the Last Judgement. Which brings me to another observation, namely that, even though his more realistic portraits undoubtedly display an affinity with the work of David Hockney, many of the qualities of Templeton’s paintings evoke 15th century paintings by figures like Hans Memling, Hieronymus Bosch and Rogier van der Weyden. That this isn’t just an unconscious fascination for Templeton, is apparent in, among other things, his recent experiments with painted tryptich panels and the emergence of photographs of 15th century paintings and sculptures in his work. But, for me, more important than these formal references is the intrinsic relationship between Templeton’s work and the work of his 15th century predecessors in the “Old World”- a relationship I would like to describe as a profound and timeless engagement with the universal parameters of being-human - and that his work is miles away from the cold, aloof intellectualism of much contemporary mainstream art.