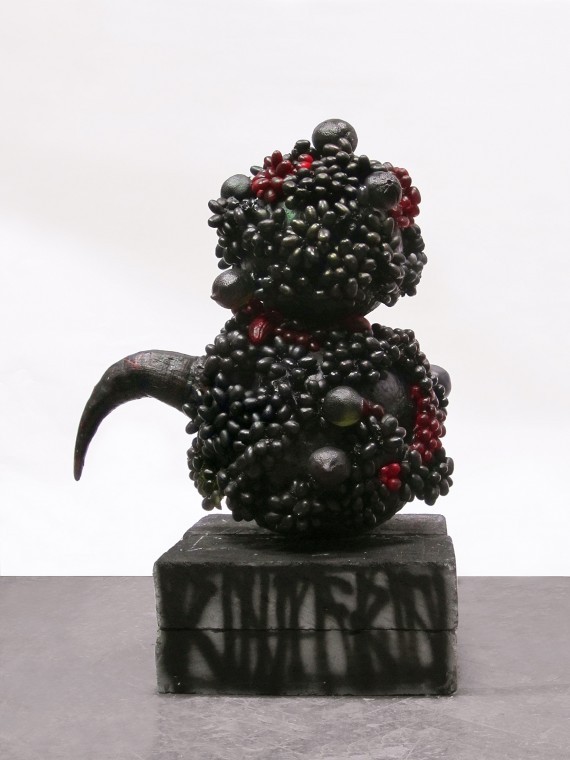 Tim Van Laere Gallery is pleased to announce Edward Lipski's (°1966, London) third solo exhibition at the gallery, from October 27th through December 3rd, 2011. The exhibition will include 7 new sculptures and 5 new wall pieces.

Part tribal fetish objects, part spray painted graffiti, and part sense of baroque overload, the works of Edward Lipski are somatic adventures. Whether Lipski provides ancient spiritual references or an inter-species exchange between fruits, plants and animals, he never fails to deliver a sensual, seductive presentation. Hybridizing plants and animals in his sculptures, Lipski explores the animistic relationship and the unclear line between the animal and natural world, creating an unusual blend of organic imagery and confrontation. Lipski avoids hierarchical cultural distinctions. Instead, he creates associative chains from unexpected formal affinities he locates between objects. According to Lipski we never left the tribe. "Primitivism is immanent, within us all the time." he declares, "Primitivism is integrated in all cultures in an invisible way. Our rituals are disguised. They are the icing we use on cakes on particular occasions."

His current exhibition emphasizes the tension between nature and civilization. Lipski shows us a chaotic mixture of fruits coming from different locations and contexts, resulting in a monstrous wild growth. Fruit and nature become a metaphor for desire and ancient classical tradition, but at the same time come across as dangerous, frightening and poisonous. These two different kinds of sensation exist in one moment. Lipksi reflects on the powerful way nature reproduces itself constantly and how life is running out of control.

Lipski's recent work is characterized by a newfound visual complexity. “My work exists between the cultural and the visual level,” he explains, “I'm interested in the space between something you understand and something that is also abstract. This confusion creates a particular intensity.” His work moves between these two poles; the distance between extremes is blurred, until we find ourselves immersed in a seductive visual chaos.