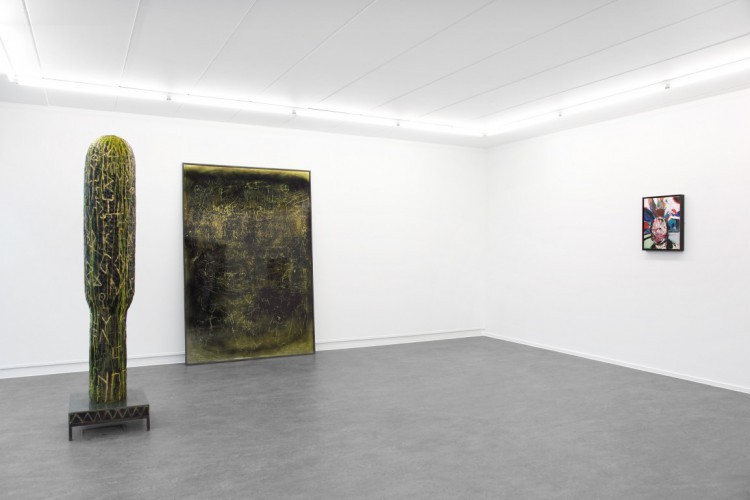 Tim Van Laere Gallery is pleased to present Run for the Roses, a group show which will open on Thursday, January 29. The exhibition will feature works by Adrian Ghenie, George Grosz, Kati Heck, Tomasz Kowalski, Edward Lipski, Rinus Van de Velde. The fascination for the work of George Grosz is the thematic thread throughout the exhibition.

At first sight Adrian Ghenie's (° 1977, Baia-Mare; lives and works in Cluj, London, and Berlin) paintings deal with subjects that carry a historical set of references, but collective memory is constantly challenged by enigmatic prophetic actions, occulted and personal folds in the temporal linearity. Ghenie's works have become increasingly complex and multilayered, generating an open-ended set of internal and external meanings. Infused with ambiguity, the works operate in the areas between figuration and abstraction, history and imagination, past and present. Recent solo exhibitions include CAC Málaga; the Museum for Contemporary Art, Denver; S.M.A.K. Museum, Ghent; the National Museum of Contemporary Art (MNAC), Bucharest. His work has been included in group exhibitions at the Palazzo Strozzi, Florence; SFMOMA, San Francisco; the Francois Pinault Collection at Palazzo Grassi, Venice; and the Liverpool Biennial.

George Grosz (1893–1959, Berlin) was a German painter, draughtsman and illustrator. He was drafted into the German army in 1914, after the outbreak of the First World War. His experiences in the trenches deepened his intense loathing for German society. Discharged from the army for medical reasons, he produced savagely satirical paintings and drawings that "expressed my despair, hate and disillusionment." During his lifetime he became internationally recognized as one of Germany's most significant critical artists. His work is included in many museum and public collections such as the Peggy Guggennheim Collection, Venice; MoMa, New York; Tate, London; SFMOMA, San Francisco; LACMA, Los Angeles; Thyssen-Bornemisza Collection, Madrid; Neue Galerie, New York.

Kati Heck (° 1979, Düsseldorf; lives and works in Antwerp) is to be considered an heiress to German Expressionism. One is reminded of the bars, dancers and actors of Otto Dix and George Grosz at the same time as the Old Masters. Heck synthesizes and fuses styles. She is as much an abstractionist as a realist. Parts of her paintings are meticulously rendered on her stitched canvases, with a unique virtuosity and acute attention to detail, while others look streaked, smeared and sculpted. She has exhibited globally with museums and leading art galleries, including solo shows at CAC Málaga, Museum het Domein, Sittard, The Netherlands and Mary Boone Gallery, New York; and group shows at Saatchi Gallery, London; Bozar, Brussels; and National Art Museum of China, Beijing.

"My work exists between the cultural and the visual level," Edward Lipski (° 1966, London; lives and works in London) explains, "Iʼm interested in the space between something you understand and something that is also abstract. This confusion creates a particular intensity." His work moves between these two poles; the distance between extremes is blurred, until we find ourselves immersed in a seductive visual chaos. He has exhibited globally with museums and leading art galleries, including solo shows at MDD, Deurle, Belgium; Alan Koppel Gallery, Chicago; The Approach, London; Greenberg Van Doren Gallery, New York; Museum het Domein, Sittard, the Netherlands; and group shows at La Maison Rouge, Paris; Mudam, Luxembourg; M HKA, Antwerp; MARTa Herford, Germany; S.M.A.K. Museum, Ghent.