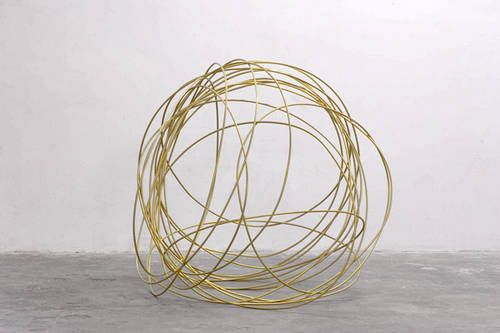 ‘Guantanamera’ is the title of a piece consisting of 19 gold colored circles, connected as a clinking chain. There is still no image because the chains have to be balanced to form an image. At every presentation a different form, a different image is realized. ‘Guantanamera’ is also the title of a worn-out song, in which the beautiful Guajira is staged as the dancing pivot. Guantanamera....Guajira Guantanamera ..... Who doesn’t remember this song?
The song started in 1890 as a poem by José Marti, one of the revolutionaries of Cuba, rebelling against the Spanish rule. His poems are clear and sharp. The later song of the middle 30s is composed on the rhythm on which laughing girls with blinking jewels on their wrists, hair in the wind, walk, dance and sing the streets of Guantanamo. “Yo soy un hombre sincero”. I am an honest person, is the first sentence. Yes indeed. It goes on, ‘I am an honest person from the country with the palm trees. Before I die I want to share the verses of my soul. My verses are light green but also firing red.’ José Marti, died in 1895, only 42 years old by a Spanish bullet.
The rhythm is tender and compelling and begins with about three guitar chords, C-F and G. Then the voice joins in ‘Yo soy un hombre sincero’ and we become involved in a slow, swinging song of an honest man. In the chorus the name of the girl is repeated frequently: Guajira Guantanamera, Guajira of Guantanamo. The guajira is also the Cuban dance music which the Spanish imported from the Canary Islands. (José Marti’s mother was born on the Canaries.) The consecutive freedom movements on the island, made the guajira the music of resistance and rebellion. During the Cuba crisis (1962) the American Pete Seegers made Guantanamera a protest song for the Civil Rights Movement. After the unilateral refusal by John Kennedy of the termination of the lease of a plot of land around Guantanamo- which the USA leases unilaterally from Cuba since 1903 for 2000 dollars annually- the song of dancing girls, poetry and oppression has become obsolete. Now it has become Gitmo, the jail where the USA plays its own freedom game and where it is unpleasantly quiet.
One moment an image of a girl was created, an image which has never been forgotten. A girl, Guajira Guantanamera, an island, colors, a poem ending up in dance music, the poet writing what he knows and wants to share so it can be carried on. The image is not untouchable, but only exists temporarily when memories can be linked to a wish. I know the euphoria of the fullness of the image and my titles mark these moments: ’Ik was een hond’, ‘Come closer’, ‘I am a woman’, ‘Come and see before it ends’.. ’Guantanamera’.
I also know the distance to the image which has gone and the loneliness which accompanies the farewell. The image holds still, ’Too late for the grave’.
henk visch, Eindhoven 12-01-2007
°1950 Eindoven-lives and works in Eindhoven