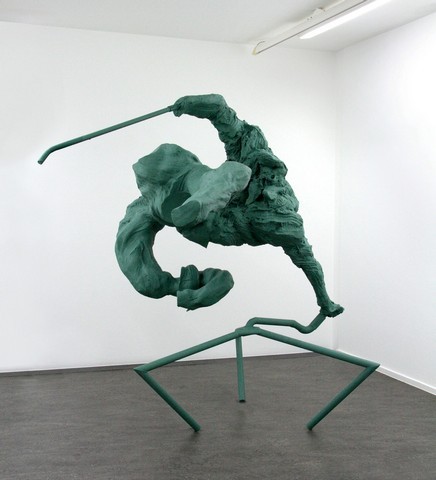 Simple plan is the title of Peter Rogiers’ second solo- exhibition at Tim Van Laere Gallery.
A simple plan refers at first sight to an elementary vision on the medium sculpture. The ‘labour’ process remains clearly visible in the sculpture, layer after layer, with as function the relation of the sculptures compared to its pedestal. Their colour and title are never anecdotal, but always linked, the title originates after the realisation of the works.
These sculptures seem even more modelled than the previous ones but carry an underlying well-studied structure.
The sculptures of Rogiers are often looked at by their position in perspective to the history of art. These interpretations are often done by a third party and by the artist only after the realisation process.
This way he emphasizes his interest in subculture and ‘l’art brut’ and it is an early memory of a few manneristic sculptures of Caius Gabiel Cibber in the Bethlem Royal Hospital in London, a remote source of inspiration for the artist. It is hard to define what is exactly ‘wrong’ with these marginal sculptures but it offers Rogiers much more possibilities than the official history.
Relatively fixed referrals are among others painters Mikhail Vroubel, Lovis Corinth, James Ensor, Louis Soutter, Georg Baselitz, Philip Guston, Gary Panter, Peter Saul and B- movies.
Rogiers thinks of himself as a traditional artist, ‘to break up things they first need a clear standard, sometimes you win by placing them in their original context and sometimes you break them up again, it is kind of a collage, assemblage.’
In his new sculptures, there is an obvious link to film and movement, by means of repetition of parts and place these in other sculptures, in another context as if these sculptures are one and the same personage and move as actors, dancers through the exhibition hall. Rogiers calls this repetition of elements ‘hybrid sculptures’.
Everything is ironic and playful, never with impartiality, a clash, conflict of opposite interests.
For the first time he exhibits some of his layered paintings standing in surprising dialogue with his sculptures. They lift each other to a higher plan.
www.timvanlaeregallery.com