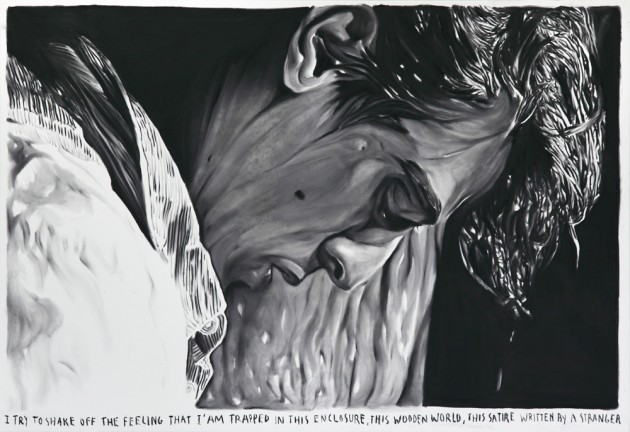 This way of working yields stylized, often explicitly posed snapshots of a pseudoheroic story set in a parallel universe, in which the artist is able to start a new life — a different artistic practice — over and over again. Behind this strategy lies a desire to step into the image, possibly even disappear into it. That is: by constantly staging his artistic practice, Van de Velde tries to undo the difference between life and work, or rather: he tries to live in his work — or more literally, his studio. There he — and in his slipstream the spectator — can, after all, move freely through an endless imaginary universe and identify with all possible alter egos (artists, evidently, but also other ‘heroes’, like musicians, sportsmen, scientists). In continuously adding images as well as ‘imagoes’ to his visually strongly recognizable mythology, he keeps on postponing the choice for a monolithic artistic practice. Or to put it differently, one could say that Van de Velde, by making drawings that have a strong own signature, paradoxically tries to become a ‘total artist’ that incorporates all possible artists.
For his second solo show at Tim Van Laere Gallery, Van de Velde built a full fledged set in his studio for the first time, where he took photos that served as the basis for his drawings. The accompanying text and quotes from that text that serve as captions on the drawings, tell a fragmentary story about the adventures of the artist himself (who wears the mask of an abstract expressionist this time) and three friends: art dealer Jim V., philosopher Frederic Z. and writer Conrad M. The focus lies on their experience of the artificial and claustrophobic space they somehow ended up in, and in which they seem to play a role they don’t seem to grasp themselves.
The set — three shacks that are surrounded by endless woods — and the installation that resulted from it, form a sultry prison devoid of an outside world, a mirror of the jammed customs and ideas of the characters, an allegorical construction that is always on the edge of collapsing. More than Van de Velde's earlier works, the exhibition focuses on the act of staging itself, of storytelling by using props, poses, compositions. As such, Van de Velde’s fiction seems to seek connection to the ‘reality’ of his artistic practice.
Koen Sels
www.timvanlaeregallery.com