When Kings Were Kings 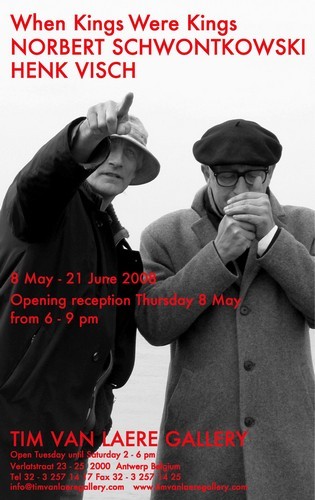 WHEN KINGS WERE KINGS

Everything is preceded by something that deludes me. There is always a before and therefore always a too late. There is no such thing as the right time. Only the work of art knows the right time. The trick is a standstill, which means all the time in the world. And where is the beginning? Here.
I was alone in the city, thinking of someone who was also alone in the city. A strange index finger played with my left outer ear. I thought of the first thing I saw this morning when, after three nightmares and two breakfasts, I broke a shoe lace and fell over backwards on the wooden floor of the home-built hut where the sound of silent people moving around without being seen could constantly be heard. The unexpected has everything to be perfect and in this case it was a young woman washing her black hair in the Scheldt colouring it in dark shades, whose navel I recently got to know and she was now looking at me bewildered and angry. I fled, ran away, but didn’t get anywhere. She put a knife in my heart. I died in her arms and everyone was humming softly as red blood dripped on the floor.
When a river jumps over a mountain, the fish will sing. When sorrow leads to melancholy, there will be 3 more years of war and the children will silently wash their hands in mud. When at sunset the city skyline seems like a ruin with a horse’s head and the towers with their dimly lit windows are swaying from left to right, that is the time to stand still and refrain from laughing, because when an aeroplane crashes, everything will be over. Everyone knows an old woman doesn't have long to live.
Her anger was a game, an excuse to be obtrusive and then control my life. It was part of a strategy aimed at bidding me farewell. I knew this. There is remoteness and closeness. I have to accept this. We are somewhere in between. What is close is too strong for us to remain there and pushes back the one who is approaching. The first impression does not yet show all the colours and stands in amazement, pale, hesitating, not crying, not laughing, not yet whining, on the side, for a while, waiting. From closeness, it is possible to jump towards “Here”. But this may be too far. You can also decide to stay. The painting is created in this hesitation, quickly but not too quickly, carefully but not too carefully. Reward: the distance is accessible and the closeness bearable. (It does require though a special approach technique involving walking backwards.)

Henk Visch leads more than a double life. I know he spends a lot of time on the quay. He is in a remarkable disguise, wearing a high pointy hat, which is actually an aerial. He has his favourite instruments with him: a Jew's harp and a single neck sitar. His instruments and song make the sadness of the departing passengers disappear. Even when daybreak comes, he is still playing and humming as the stomping engines and last navigation lights of the floating coffins, junks and longboats move away from the harbour.
When the day finally gets enough light, I see him in his workshop, which he built in the middle of the woods
(with holes and shining silver watchtowers). He still has a wide brim hat over his eyes. He hums and grinds his teeth, makes little clots and likes to bend small pipes, which look like a jumble and are considered a world formula by his followers... He is engrossed in thoughts for weeks. Thoughts about nature and things. He sees how lines explode and bodies implode. He does research into black holes and white holes, particularly their auras.
The Belgians see him as a Belgian, the Germans think he is a Dane and the Dutch consider him as one of their own. I, however, believe that he comes from a place far more remote, beyond the sea and even beyond the next sea after that. I even think he comes from a place beyond the stars, which is revealed by his dialect and those hordes of metal-like creatures that are never far away.