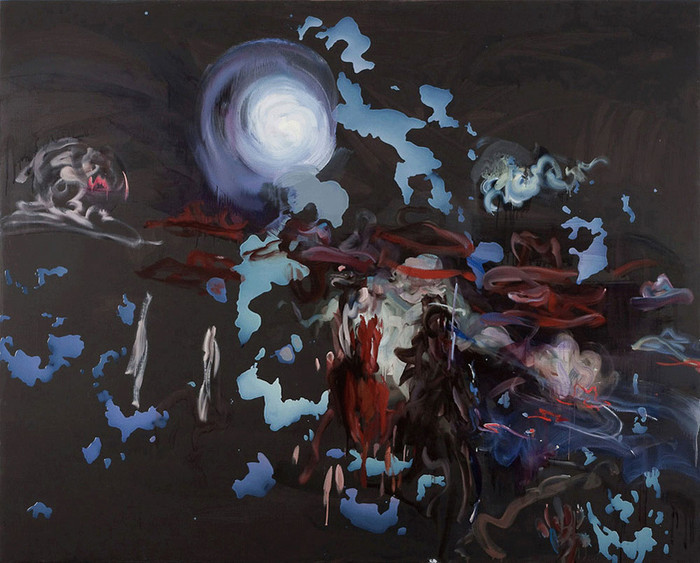 Alisa Margolis, Light is the Ghost, 2009
Galerie Wilma Tolksdorf Frankfurt is pleased to present an exhibition of new paintings by Alisa Margolis. This is the Berlin based, American artist’s first solo show in Frankfurt. In Oc-tober-November 2007, she exhibited a body of paintings with the title Ancient History in the gallery's Berlin space.

On view in the current show are large oil paintings, including “If You Want Me I'll Stay”, “Magnificent Desolation” , “The Special Ones (All Right Now)”, “Necktie Party, Scary Party”, and “Light Is The Ghost”, among others, in addition to a series of smaller works, “Flower Painting 1-5” (all works 2009).

This exhibition presents several themes from the artist's ongoing project at the intersection between abstraction and figuration, and her reworking of the contemporary experience of the sublime.

The new series of Westerns Paintings were produced while watching films, as in a continu-ous motion drawing class exercise. As in other of Margolis' work, the seemingly fake tran-scendence of pop culture is taken as a concrete beginning, as the works channel the ba-roque, over saturation of films such as Sergio Leone's Once Upon A Time In The West (1968), and the underground classic starring John Wayne Hondo (1953) from which the title of the exhibition is taken.

The “Flower Paintings” in some ways mark a return to familiar ground for the artist, though as opposed to working from reference material, this group of five paintings were produced from a large bouquet still-life in the studio, capturing different angels as the bouquet was rotated while the flowers slowly dried out.

Alisa Margolis (born 1975) graduated from Columbia University in 1997, and from 2001 to 2003 was a resident at De Ateliers, Amsterdam. She lives and works in Berlin and London.
Her work has been included in The Triumph of Painting (The Saatchi Gallery, London), the Prague Biennial, and will be featured as part of Rehang, a temporary intervention collateral to the 2009 Istanbul Biennial.
Margolis is a 2009-10 fellow at Schloss Solitude, Stuttgart.