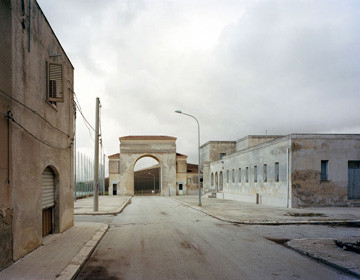 In her photographs the artist deals with the structure of ideal settlements built under Benito Mussolini in the backcountry of Sicily between 1926 and 1943 which articulate an attempt of creating social order. As already in her previous series 'Displace' Johanna Diehl focuses on the memory of places, the media awareness of architecture and its connection to ideology.

Those programmatically designed villages, so-called "Borghi", were intended to colonize and develop the rural Sicily and served as centres for the agrarian communities. The borghi generally consist of buildings with similar types: a central piazza, a church, governmental headquarters, school and other facilities representing the structure and the claim for power of the Fascist Party. Nowadays most of the borghi may be found abandoned within a landscape as unfulfilled Utopias, as places without memory filled with time.

By choosing the singular 'Borgo' as title for the show Johanna Diehl emphasizes that the focal point of this cycle lies not in the enumeration of particular phenomena but in the concept of those places.

The large-size photographs (analogue C-Print, 103 x 131 cm) are delving into almost Potemkin-like scenery construction. They are dealing with the artificial structure and surface of those places and their immanent filmic-photographical awareness. The series of the smaller formats (38 x 48,5 cm) indicates a typology - it pictures edifices with certain functions and produces in total a virtual place existing only in the sequence of those images.

This conceptual approach was inspired by the legend of the foundation of the Sicilian town Mussolinia which was literary adopted by Andrea Camilleri and Leonardo Sciascia. That place was actually planned and conceived on paper, and there was supposed to have been the foundation stone ceremony, but it was never realized. When Mussolini asked for the disposition of the city, the responsible persons built up facades in the woods, took photographs of the scenery and took it down again. They then mixed the photographs of the scenery with those of other existing places and thus created a place that only exists in photography. Johanna Diehl follows this idea of creating a non-existing place in the medium of photography and shows us its construction.

Johanna Diehl was born 1977 in Hamburg - she lives and works in Berlin. She has studied photography at the Academy of Visual Arts, Leipzig under Prof. Timm Rautert and was master student under Tina Bara. The work series BORGO was supported by the working scholarship of the DAAD.
www.wilmatolksdorf.de