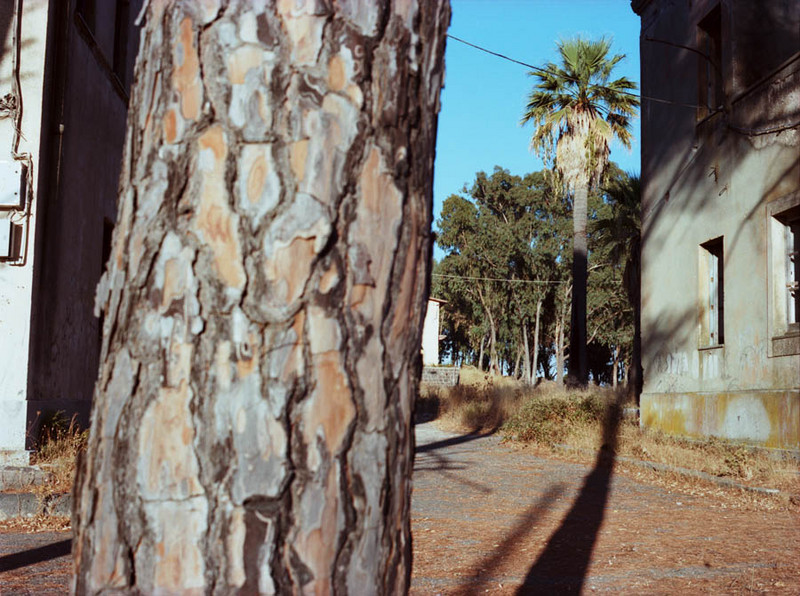 Courtesy GALERIE WILMA TOLKSDORF | © Johanna Diehl
Works presented in the exhibition SETS are shifting along the interface between photography and film. Places depicted in the works are located in Sicily, Rome, Bolzano, Bergamo, Trent and were built under Mussolini. The exhibition introduces an extended readability of the published trilogy ‘Borgo Romanità Alleanza’ (Hatje Cantz, 2014) and expands the photographic image towards the dimension of the cinematic.

Three different aspects maintain a focal point of the exhibition. The first refers to the pan shots and camera work in movies of the propaganda facility ‘Instituto Luce’, founded in 1924, as well as in the work of the director Michelangelo Antonioni in his films from the 1950’s and 1960’s. The second aspect deals with the stopping of the moving image and with the exposing of the view. The third approach concerns the impact of the historical narration on the public space which today is still used as a stage for the political and everyday life.

The depictions in frescos, marble and stone generate a specific political dimension of those places. They can be read as ‘backdrops’ - a technical term taken from area of the stage setting which means a painted curtain used as background of the stage. Placed in front of those settings things become scenery and persons transform into parts of the play (mise-en-scène). Within the works of Johanna Diehl the expression ‘mise-en-scène’ refers to the original 'mettre quelqu'un, quelque chose sur la scène', which means as much as ‘to make someone or something become a subject of the theater or to assign a place to someone or something’.

In the movies of the Instituto Luce the Italian settlements planed and built under Mussolini formulate settings for the appearance of power. In doing so, they turn into frames of ideological iconography and become scenes of the spectacle. Within their filmic transition, they seem only to exist in order to create meaning and relevance. In the movies of Antonioni these places on the contrary become sites of meandering protagonists who do not know what to do. While in the propaganda movies the architecture obviously dictates how to move, think and behave, in Antinioni’s films it turns to a medium which reflects the inner conflicts, isolation and void of the characters.

Johanna Diehl’s recent works presented in the exhibition encounter this twofold existence of the places by discussing the elements of the filmic within the medium of the photographic image. She restages these places for the third time while simultaneously dissolving them from the status of framing a plot or being a setting for agents, so that liberated observation from an ‘aesthetic distance’ becomes possible in the first place. By releasing and intercepting cinematic images, Johanna Diehl points toward the irresolvable status.


Johanna Diehl (*1977 in Hamburg, Germany) lives and works in Berlin. She studied photography/visual arts at the Academy of Visual Arts in Leipzig under Prof. Timm Rautert, Boris Mikhailov, and as a master-class student under Prof. Tina Bara. She also studied at the ENSBA Paris under Christian Boltanski and Jean-Marc Bustamante. Her works have been shown at various national and international exhibitions. She has received numerous awards, most recently the working stipend of the Foundation Kunstfonds Bonn and the Akademie Schloss Solitude.