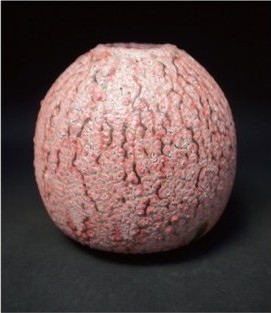 Adam Silverman was born in New York in 1963. After studying art and architecture he moved to California, where in 1991 he co-founded the fashion brand “X-LARGE”. Since 2002 he has been working as a ceramic artist. In 2008, he was appointed studio director of Health Ceramics. His artwork is characterized by a sense of nature being abstracted, as evoked by its lava-like textures, organic forms and the use of colours such as cobalt blue. In 2012 at The Kimbell Art Museum in Fort Worth, Texas, he created the project ‘Reverse Archaeology’: ceramic works composed entirely of materials gathered from the construction site of the museum’s new wing designed by Renzo Piano, as well as from the iconic original building designed by Louis Kahn. To celebrate the publication of Adam Silverman Ceramics, published this fall by Rizzoli, New York, this exhibition runs simultaneously with Adam Silverman “Earth” to be held at Playmountain (http://www.landscape-products.net/index). The exhibition comprises new works, together with posters on which Silverman collaborated with the photographer Stefano Massei, and graphic designer Tamotsu Yagi. Silverman’s work is in the permanent collections of the Los Angeles County Museum of Art and the Nasher Sculpture Center in Dallas, Texas, as well as many private collections in the US and Japan.
www.tomiokoyamagallery.com