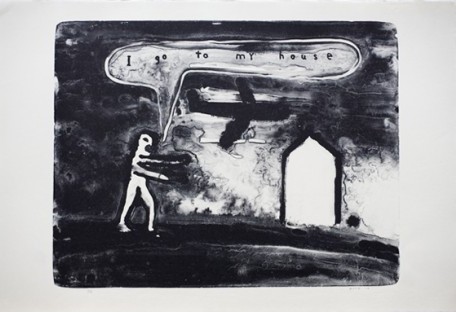 David Lynch is a well-known movie director but has also expressed his creative impulses in other media from his early years: painting, photography, animation, and sculpture as well as film. He had a solo exhibition of his artwork at Leo Castelli Gallery in 1989. His largest retrospective exhibition “The Air is on Fire” at Fondation Cartier pour l'art contemporain, Paris in 2007 achieved great success. In Japan, he held a solo exhibition at the Toko Museum of Contemporary Art in 1991, and recently, at Laforet Museum Harajuku in 2012. Lynch is exhibiting work at a special exhibition at 21_21 DESIGN SIGHT, “Image-Makers”, from July until October this year. This will be his second solo exhibition since 2012, and he will present a series of photographs “NUDE ATELIER IDEM 2012” as well as recent works including lithographs produced after 2012.

David Lynch was born in 1946, in Montana, USA. He enrolled at the Pennsylvania Academy of Fine Arts in 1965, aiming to become a painter. Funded by AFI (American Film Institute), he completed the production of “Eraserhead” in 1977. He went on to release “The Elephant Man” in 1980 which was nominated in eight categories at the Academy Awards, “Blue Velvet” in 1986 which was nominated for Best Director at the Academy Awards, and “Wild at Heart” in 1990 which won the Palme d'Or at the Cannes Film Festival, while his TV series “Twin Peaks” which ran from 1989 to 1991 became a big hit all over the world. He received the Best Director Award at the Cannes Film Festival in 2001 with “Mulholland Drive”, and in 2006 he was given the Golden Lion Award for lifetime achievement at the Venice Film Festival.
www.tomiokoyamagallery.com