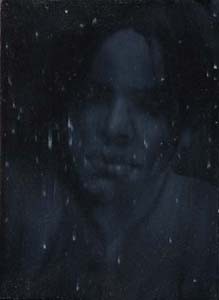 Tomio Koyama Gallery is pleased to present The Indirect Man, the first Japan solo exhibition by Diego Singh from April 28- May 26, 2007.
Diego Singh's work is described by curator Dominic Molon as "...constructing imaginary other worlds that function as self-portraits, radically expanding the possibilities of that artistic tradition... The work incorporates the viewer in the artist self-mythology wile remaining deliriously ambivalent about the boundary separating constructed self-identity and fictional license".
In Singh's paintings, drawings and sculptures the self is addressed as a territory open to investigation and play, where gender and historicity are in constant flux, and identity is thought of as a possibility that allows for a series of strategies that seek to reveal or obscure its own nature. For Singh, a painting that passes for a poster or that references sculpture is also a way for experimenting with the intersections that converge in the conception of a syncretism discourse.
In The Indirect Man, the self-portraits function as synthetic constructions where modernist discourses and mass media languages meet; cinematic techniques (zooms, fade outs) minimalism, surrealism, pop, fashion and primitivism... All the paintings use black as a main component?as both color and sign. Like in a night scene, the faces and forms become abstract, the subject is zoomed, cropped, eyes move, multiply or glow while quoting aspects of glam rock, drag culture or homelessness; avoiding direct representation in an atmosphere that is at once, excessive, androgynous and tragic.
In some, the canvas passes for a plastic bag becoming almost a sculptural object, another painting depicts a close-up of a mask or minimalist neon structures interacting with a set of eyes, or a mouth.
In all the works presented the self-portrait becomes "...an object of inference and not of perception, an object of culture and not of immediate or natural intuition"*1. In Singh's project the status of the self-portrait or the self-portraitist will always retain a hypothetical character, giving the artist a performative role, where the audience constructs a narrative by reading the hints that are proposed.
This exhibition will include a life-size sculpture depicting an almost naked man (he wears gloves and a belt), seated as in one of the most traditional poses in classical sculptural portraiture. The figure has an oversized head that is both baroque wig and rock-alike construction, precariously supported by painted iron sticks.
Diego Singh was born in Argentina and pursued a B.A. in Social Communications from the Kennedy University and an M.A. in Art Direction. During 2003 and 2004, he acted as a curator at the Miami Light Project (Miami), directing its Visual Arts Program. His work has been featured in a solo exhibition at the Fredric Snitzer Gallery in Miami and included in group exhibitions such as I Feel Mysterious Today at the Palm Beach ICA that included artists such as Mike Kelley, Wangechi Mutu and Douglas Gordon, Pinata Party at Gavin Brown's Enterprise, New York, For all and no one at the Museum of Contemporary Art, North Miami; Hanging by a Thread at the Moore Space Miami, which Included works by Tal R, Christian Holstad and Jonathan Pylypchuk, Constant Disturbance at the Centro Cultural Espanol, Miami; Think Warm at the Tomio Koyama Gallery and Drawn In Drawn Out at the Florida Atlantic University, among others. Upcoming projects include his second solo exhibition at the Fredric Snitzer Gallery, scheduled for early 2008.
www.tomiokoyamagallery.com