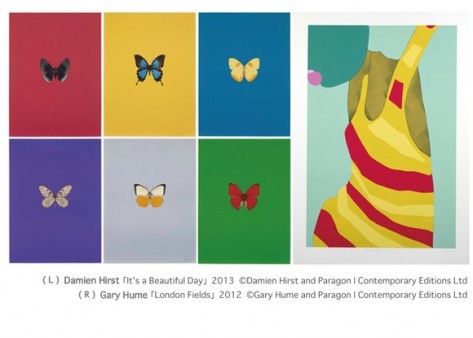 Concept:
Jake & Dinos Chapman are brothers who work collaboratively, creating grotesque works with themes of violence, sex, and death. Receiving mixed reviews on the one hand, they were also nominated for the Turner show in 2003. Damien Hirst, who expresses the complex relationship between art, life and death, has shocked many with sensational work such as a huge shark preserved in formaldehyde, while his name is carved in contemporary art history as the representative of the YBA (Young British Artists). Chosen to represent the UK in the 1999 Venice Biennial, Gary Hume creates innovative constructions of surface and line, while also working on collaborations with fashion brand "MARNI" in which bold color is used powerfully in simple and original expressions. He is also currently holding a solo exhibition at Tate Britain until September 1st. Based in Glasgow, David Shrigley presents works which, while based on radically violent themes, have an overall feeling of humour and sorrow. Works also appear in video clips of Blur, and he has also been nominated for this year's Turner Prize. This exhibition will include a display of prints and new works by these 5 British artists. Please come to enjoy their original perspectives on the world.
www.tomiokoyamagallery.com