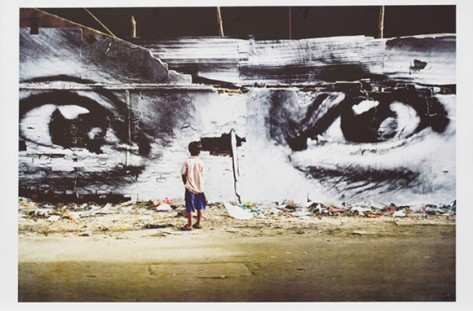 At the age of seventeen, JR began mounting photographs on buildings and other public spaces as a means of artistic expression. Traveling around the world, he later started capturing scenes of people who must live through oppression, poverty or discrimination and posting the gigantic images onto walls which are part of the lives of the local people. In 2012, as part of his global “Inside Out Project”, he drove a photobooth truck equipped with a specialized portrait camera and large format printer and toured the stricken areas caused by the Tohoku earthquake and tsunami in Japan. As he did for the Project elsewhere, he photographed the local Japanese people and exhibited the photographic works in the midst of their local surroundings. JR’s practice turns the world’s streets into a gallery that anyone can view, and in so doing, he displays the problems of a particular region to a global audience – and a new way of communication is born.
This exhibition features 10 lithograph works including the one made in collaboration with world famous film director, David Lynch.
JR was born in Paris, France in 1983. He lives and works in New York and Paris. JR was the winner of the TED Prize in 2011. Selected exhibitions include the 52th Venice Biennale (Venice, Italy, 2007), “Portrait of a Generation” installation at the Tate Modern (London, UK, 2008), “Paris-Delhi-Bombay” photobooth installation at Centre Pompidou (Paris, France, 2011). In Japan, his solo exhibition was held at the Watari- um Museum (Tokyo, Japan, 2013).
www.tomiokoyamagallery.com