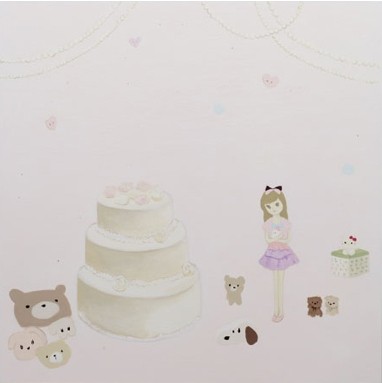 Kuwahara was born in 1959 in Tokyo, and started presenting his work in the 1980s. His work seems to embrace the distortion and darkness of Japan’s high economic growth period, when he was growing up. A pig, half of the body of which has turned to ham; glittering imported, crude copy products, strange waterside creatures who are contaminated by factory sewage – they are depicted repeatedly with smooth flat brushstrokes. It seemed precisely as if his work were raising awareness of social problems, revealing the guilty conscience or shame of post-war Japanese society.
Since the mid-90s, however, Kuwahara’s work has moved away from such a social discourse, and his gaze started focusing on more private and internal aspects. Motifs of flowers, jellyfish, or dolls float in a milky-white plane, where specific temperature, languid warmness are drifting. When he started depicting nameless girls who are consumed on magazines and advertisements, sticky weights seen in his work was replaced by lightness. In his recent bright works, a feeling of desolation is accompanied by idiosyncratic happiness, and the girl figures resemble the Madonna. This exhibition will feature new and recent works produced since his solo show in 2012.