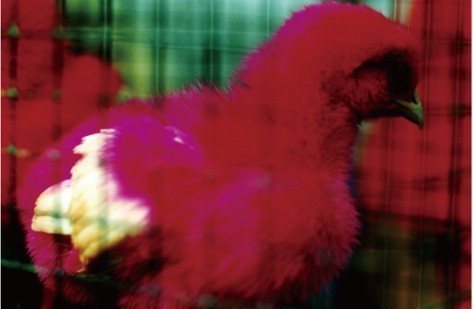 The name Mika Ninagawa will remind many people of her series such as “Acid Bloom”, “Liquid Dreams” or “FLOWER ADDICT” in which flowers and goldfish, or popular idols and models are photographed in vivid and strongly impressive colors. These colors are also known as “Ninagawa Color”, embracing an atmosphere which is bright, free and candid. However, to almost the same extent as vivid light, her eyes are drawn to the shadows too. For example, she captures the inseperability of life and death as being two sides of the same coin in the series “noir”, and in the series “PLANT A TREE” she gives her whole attention to grasping the cherry blossom that scatters in the Meguro River. Ninagawa lays before us a rich black color and darkness in her photographs, just as she has said, “Within black brims color; within color hides black.” (noir)

In spring 2015, Mika Ninagawa will hold solo exhibitions at 8/ ART GALLERY/ Tomio Koyama Gallery, Hara Museum of Contemporary Art, CAPSULE and SUNDAY. At 8/ ART GALLERY/ Tomio Koyama Gallery, the “noir” series will be on view. These four exhibitions feature various aspects, including light and shadow, which constitute a complete presentation of Mika Ninagawa’s art as a photographer.

Born in Tokyo, Mika Ninagawa is a photographer and film director. When she was a student majoring graphic design at Tama Art University, she received the Grand Prize at 7th Photography Hitotsubo Exhibition and the Excellence Award at the 13th New Cosmos of Photography by Canon. After that she was awarded the Encouragement Award at 9th Konica Award, the 26th Kimura Ihei Photography Award, and the Ohara Museum of Art Award at VOCA 2006. She has published photography books every year since her early career, almost 90 to date. Her large retrospective exhibition, “Mika Ninagawa: Earthly Flowers, Heavenly Colors,” opened at Tokyo Opera City Art Gallery in 2008 and toured four major museums in Japan, recorded as many as 180,000 visitors. As a director, she directed her first feature film Sakuran (2007), which was highly acclaimed both within Japan and internationally, and screened at the 57th Berlin International Film Festival and the 31st Hong Kong International Film Festival. Her second film Helter Skelter (2012) has received the Silver Prize at the Kaneto Shindo Award. In 2014, Mika Ninagawa was appointed as an executive board member of the Tokyo Organizing Committee of the Olympic and Paralympic Games by virtue of her experiences and insights in arts and culture.