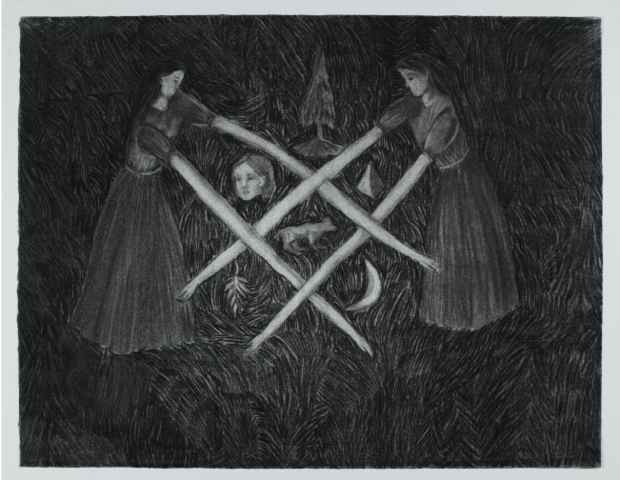 The paintings of Nana Funo symbolically represent graceful animals, plants, figures and letters that cover the whole pictorial space, regardless of its size. The repeated layers - created using various techniques such as acrylic paint, dyes, and masking, possess “a spatial complexity that cannot be captured through such mere expressions as those of floating, overlapping, or depth.”(Mitsue Nagaya, “VOCA 2009: The Vision of Contemporary Art”). Along with her painting works, she also draws by pen in a notebook for 3 to 5 hours a day. The technique and unique textures she brings about by continuously moving her hands across the picture plane start to function as an independent language, and it is as if the artist gazes in concentration at the state of the world, while keeping it at a certain distance from herself and her works.

“When I am creating, I feel as if I am diving into water, or descending into the underground inside me. What I rely on at that time are the drawings that I have drawn many times which my hands remember, and the motifs that have come to be closely related to me as I have drawn them repeatedly.To stop breathing as long as possible, but never to drown. To draw continuously for a long period of time. To step forward without fear, even though the stairs continue such a long way down to the underground, and though the sunlight does not reach it.” (Nana Funo)