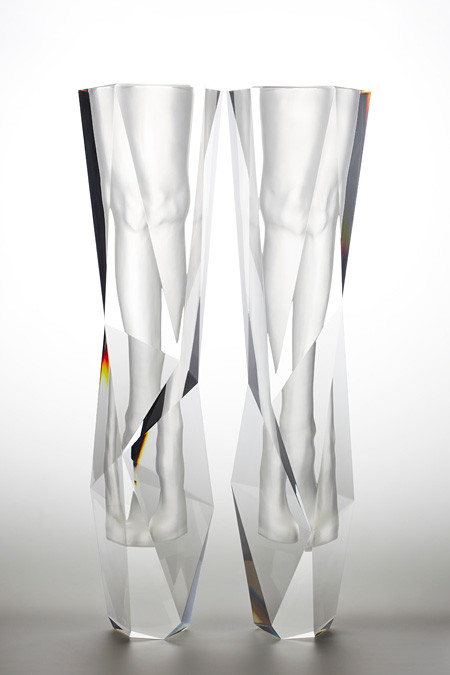 The artist Noritaka Tatehana was born in 1985. He entered Tokyo University of the Arts, Faculty of Fine Arts, Department of Crafts in 2006 and majored in dyeing and weaving design. He created shoes with thick platforms ("Heel-less Shoes") as his 2010 graduation project, and the shoes caught the attention of Lady Gaga's stylist. By becoming her exclusive shoes-maker, he stepped suddenly into the spotlight.
Many sides of Noritaka Tatehana as an artist are presented in this exhibition. Over ten items including Heel-less shoes, his icon that is in the collection of many museums, and one objet created in the motif of a kanzashi (ornamental hair pin) are to be displayed.

My graduation project named "Heel-less Shoes" set off from the point when they attracted the attention of fashion industries overseas. However, the idea actually came from "Takageta" (high heeled clogs) that used to be worn by Oiran (courtesans). When I was learning the traditional Japanese dyeing techniques of "Yuzen-zome" at the university, I created "Kimono" and "Geta" after the model of classics. The Japanese stylized flat-plane art, and spatial art founded on Western anatomical research seemed to me to be opposite values. However, the place where both coexist is today's Japan. It is this condition of Japan today, which received an influx of American culture after the War, that allows for the hidden possibility of rebuilding Japan's cultural values.
Noritaka Tatehana

For him, the Heel-less Shoes are an artwork that has the sense of the contemporary which enables them to cross back and forth consciously across the borders of tradition and innovation, and also of local culture and global sentiment.
Noritaka Tatehana founded "NORITAKA TATEHANA" as soon as he graduated from Tokyo University of Arts in 2010. As well as his participation in Japan Fashion Week and New York Fashion Week, in the year after his brand foundation, he held his exhibitions at 3 stores of Commes des Garcons in Tokyo, Paris and London at the same time, the brand that motivated him to be a part of fashion industries in his high school days.