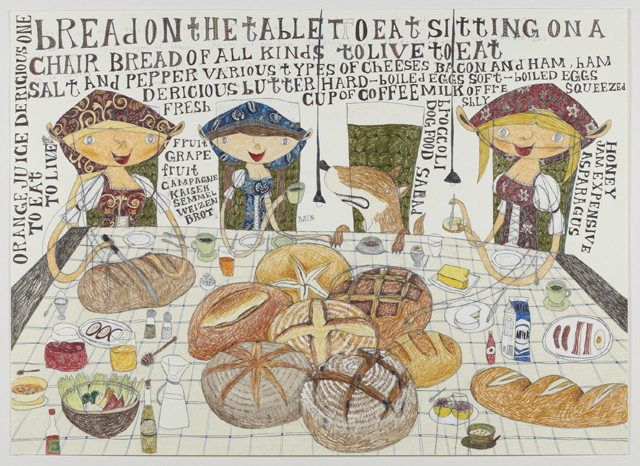 Shintaro Miyake was born in 1970, Tokyo, where he currently lives and works.
Miyake makes free use of various means to create his individual artistic world, such as the picture-scroll-like drawings on horizontal screens in which characters enact a variety of scenes, and his ‘live drawing’ performances wearing originally-designed character costumes which seem to have jumped straight out from his work.
The freely soaring wit of his artistic world has attracted an international audience. Miyake has held many solo exhibitions such as in Italy, Austria, Berlin, and Taiwan. His 2013 solo exhibition in Berlin, consisting of works drawing on Nordic mythology not to mention the stylish Viking clothes in which he was dressed and the sight of the hand-made boat in which he began sailing on the sea, crossed national boundaries in captivating its audiences.
The artist will be performing live drawing on weekend for the duration of the exhibition period. On 27th December, a talk and screening event will be held at Hikarie, Shibuya.
www.tomiokoyamagallery.com