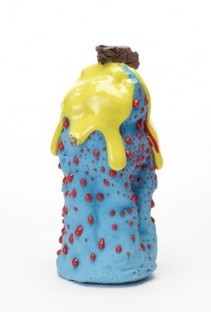 Takuro Kuwata is a ceramic artist born in 1981 in Hiroshima. He graduated from Kyoto Saga Art College in 2001, and started studying under ceramic artist Susumu Zaima in 2002. He also studied at Tajimi City Pottery Design and Technical Center until 2007, and currently lives and works in Toki City, Gifu, where he has a studio. He has received many awards including the Hamada Shoji Award from the 6th International Mashiko Ceramics Competition in 2006, and has presented his work internationally in New York, Brussels and London, as well as in museum shows such as “Art Crafting Towards the Future” at the 21st Century Museum of Contemporary Art, Kanazawa, Ishikawa, Japan in 2012.
Kuwata’s work embraces boldly deformed shapes and vivid colors, while the foundation of his techniques is based in the long history of tea ceremony and ceramic culture, where Kairagi (cracked glaze from firing) of Choseki-yu (or Shino-yu) or Ishihaze (stones exploded after being mixed in clay and fired) have been admired as “sceneries”. Starting with the classical tea vessel, Kuwata experiments and plays freely with clay and glaze. In this process, forms are dissolved and vivid colors push towards the extreme. Kuwata’s bright, sharp, yet simple sensitivities glow with the foundation of the history of ceramic art and techniques, reminding us the richness of ceramic art, both traditional and experimental.

This exhibition will feature both large and small-scale ceramic sculptures, including tea bowls. Kuwata will also present his work at “Heaven”, a space designed by Isamu Noguchi on the 1st floor of the Sogetsu Kaikan from April 4th to 18th.
www.tomiokoyamagallery.com