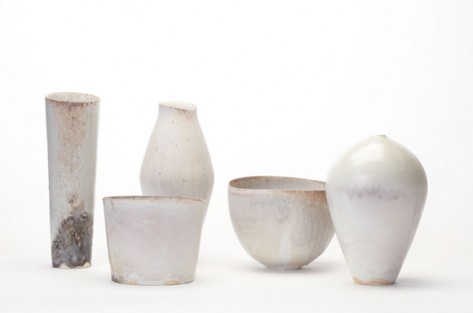 Taro Tabuchi is a ceramic artist born in 1977. After graduating from the Crafts Department of Osaka University of Arts, he received the Grand Prize at the 21st Asahi Modern Craft Exhibition in 2003, and he was selected as one of the artists at the 7th International Ceramics Competition Mino in 2005.

In 2007, he returned to his birthplace Kagawa, and constructed "Ana-gama (hole kiln)". While many artists choose to use gas and electric kiln as they are easier to control, he gathers firewood himself in the mountains and continues to create white porcelain by firing in a wood-fired kiln. The variation of fire and ashes that come out of wood-fired kiln produce unique color and pattern variations. Only a part of soil touched by the fire that rises from the fur- nace door turns into a faint cherry blossom color, and the ashes that lie inside create a pattern that resembles transitory sky in spring.