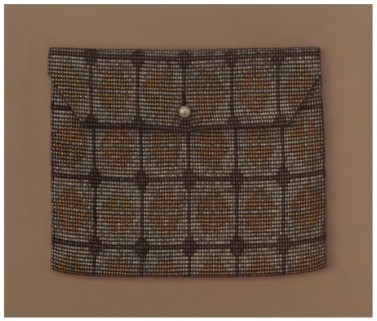 There was a necklace that appeared in many of Gitman’s female profile portraits – works which resemble those of Flanders in their crisp and delicate portrayal of the women. One day, she came up with the idea of painting only the necklace itself. This led to her series of paintings of beaded purses and necklaces, "On Display”.

She often selects her subject matter at places such as antique markets, where she is able to think only about what is unsurpassingly pure in its beauty: in particular, she says that in the object of the white beaded purse one may sense the formal elegance of 20th century fine art. The geometric patterns of these bead-pouches, tensely composed against flat backgrounds, evoke a continuity with the works of Sol Lewitt and Agnes Martin. By aligning the patterned surfaces of the purses with the picture plane, Gitman alludes to the Modernist ideal of pictorial flatness and plays with concepts of surface and form, flatness and content, opticality and tactility.

Precisely as if repeating the iterations of actual beaded embroidery, the artist paints each bead individually, limiting her painting time from morning onwards for as long as the sun is present in the sky. The soft light that envelops her motifs at the time when she must cease painting allows us to sense the light, air and humidity of the natural environments where her motifs are positioned.
Concurrent with the series "On Display", Victoria Gitman also continues to work on the series ‘The Beauties,’ consisting of female portraits based on postcards of Renaissance paintings. In the resulting series of small works, details such as the braided hair, pearl necklaces and gold embroidery that even in the older works were diligently depicted, in the minute precision with which they are rendered here reveal something of the fetishism concealed in the originals. What fundamentally captured the artist’s interest was the structure itself of these images: these women who are decorated to an unparalleled extent fit into their frames precisely as if they too are ‘on display’. As in the series of purses and necklaces, the finely nuanced surfaces of the images lure the viewer close and elicit and intimate gaze, making the courtship between picture and beholder a central axis of her work.

In this exhibition, paintings and drawings from the series ‘On Display’ will be shown. We invite you to enjoy the realism of Victoria Gitman’s artwork, brimming with the quality of sparkling light, as if distilling the essence of tranquillity.

Victoria Gitman was born in 1972, in Buenos Aires, Argentina. She moved to the USA in her teenage years and she presently lives and works in Miami. In 1996, she graduated from Florida International University in Fine Arts and Humanities.

In addition to her solo exhibitions at art museums, including "Looking Closely"(Las Vegas Art Museum, 2008) and "On Display"(Bass Museum, Miami, 2005), she has also exhibited extensively at galleries centring on the United States, including David Nolan Gallery in New York and Daniel Weinberg Gallery in Los Angeles. Her works have been collected by such institutions as The Museum of Modern Art New York (MOMA), Los Angeles County Museum of Art, and the Whitney Museum of American Art.

Statement : Victoria Gitman
On the Surface

The paintings and drawings in this show, part of the series "On Display," depict vintage beaded purses that feature geometric patterns, abstract designs, and simplified shapes. With the purses posed flat against a neutral plane, they echo formal tropes of Modernist abstraction and play with concepts of surface and form, flatness and content, opticality and tactility. Each work in the series is a life-size portrait of a purse limned from direct, close observation. Covering just a few centimeters each day, the surfaces are slowly built up bead by bead, a painstaking process that turns facture into subject. The resulting granular images at once expose their constructedness — an aggregate of units that schematizes forms — and become feats of illusionism, each bead faithfully rendered, like a Zeuxis grape.

The full-frontal presentation of the purses aligns their patterned surfaces with the flat picture plane, equating the two and alluding to the Modernist ideal of pictorial flatness. The (fictive) beaded planes become stand-ins, miniaturized and crystallized, for Painting's material surface. Small in scale and finely nuanced, the seductive surfaces lure the viewer close and elicit an intimate gaze that is as much haptic as it is optic. They thus bring to the fore a kind of pictorial desire in which vision and touch are entwined, and they make the courtship between picture and beholder a central axis of the work. Playing with the metaphoric analogies between purses and paintings, the works pose purse as image and image as purse.