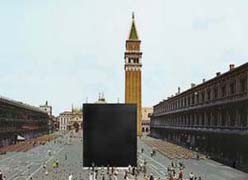 German art is currently one of the most important impulses of contemporary art. Tomio Koyama Gallery is pleased to present ten of the most prominent artists working in Germany today: Thomas Scheibitz, Gregor Schneider, and Thomas Schutte, each celebrated at past Venice Biennales, along with Norbert Schwontkowski, Andreas Slominski, and Amelie von Wulffen are among the influential artists to be exhibited. Furthermore, Abel Auer, Jonas Burgert, Josef Strau, and Nicole Wermers are pointing the way for the further development of German art.

WONDERWALL - CONSTRUCTING THE SUBLIME thematizes formal aspects of sacred architecture and the visual construction of the sublime. Serious, light, strictly formal, or ironically distanced, works in the exhibit all come at this theme with verve and variety. The architectonic icons from European, African, Oriental, and Asian sacred buildings are reflected artistically in a multitude of process and approaches. A world premier in Tokyo.

ABEL AUER (*1974, Munich) became known foremost in Britain with paintings that connect, in unprecedented ways, the flashy and artificial colours of modern advertising and fashion with the landscapes of the 19th century and with the folk art of his Yugoslavian grandfather. The group exhibition with Kai Althoff, Vom Monte Scherbelino Sehen, at the Diozesanmuseum Freising in 2003, brought Auer to the attention of a broad public. Exhibitions that followed included those at the Kunstlerhaus Stuttgart, Gallery Daniel Buchholz (Cologne), Kunstverein Hamburg, Tanya Bonakdar Gallery (New York) and at Gallery Corvi-Mora (London). In 2007 Abel Auer's work can be seen in the Domus Artium (Salamanca) and at the National Gallery of Prague. He lives and works in Hamburg.

JONAS BURGERT (*1969, Berlin) has been a rising star over the past two years. Discovered in 2005 at an alternative art fair in Berlin by the director of the Hamburger Galerie der Gegenwart, Burgert's path lead him from a nearly unknown artist directly to a museum exhibition, where he was shown alongside artists such as Gregory Crewdson, Peter Doig, Jorg Immendorf, Neo Rauch and Ena Swansea. Since then, international collectors such as Falckenberg, Olbricht, Sander and Saatchi have sought out Burgert's large-format figurative images-reminding one of Tintoretto and Caravaggio-which keep viewers enrapt in a seemingly mystical atmosphere. Many critics celebrate this Berlin artist as one of the most exciting discoveries in years. Jonas Burgert lives and works in Berlin.

THOMAS SCHEIBITZ (*1968, Radeberg near Dresden) became known in the English-speaking world through exhibits at the ICA London, Walker Art Center (Minneapolis), and at the Aspen Art Museum. Solo shows followed at the Kunstmuseum Winterthur and at the Stedelijk Museum (Amsterdam). The international art audience finally became aware of Scheibitz's painting and sculptures-which play with the border between figuration and abstraction-when he represented Germany at the 51st International Art Exhibition in Venice, together with Tino Sehgal. Scheibitz is treasured for his cool colours and forms and is represented by the world's most important collections and museums. In 2007 his work will be seen in extensive individual exhibitions at the Irish Museum of Modern Art, Dublin, then touring to the Camden Art Centre, (London), and in a group exhibition at Tate Modern, London. Thomas Scheibitz lives and works in Berlin.

GREGOR SCHNEIDER (*1969, Rheydt) has since the 1980s been dealing with the construction of interior spaces, with the complex relation between constructed space and the individual, and with the reciprocity of space and sensibility. The crucial element of his artistic method is the visible or invisible doubling or multiplication of enclosed spaces that then become the receptacle of premonitions, memories, and speculations. His Totes Haus ur, as the German contribution of the 50th International Art Exhibition in Venice, was awarded the Golden Lion for Best National Participation. Schneider's works have been presented in over twenty exhibitions; the Hamburger Kunsthalle, the Sprengel Museum (Hannover), the Museu Serralves, the Aspen Art Museum, the MMK (Frankfurt), the Sandretto Re Rebaudengo Collection (Turin), and Art Angels (London) have all devoted solo shows to his work. In 2007 the Kunstsammlung NRW in the Standehaus Dusseldorf will present a comprehensive solo exhibition. Gregor Schneider lives in Rheydt near Duseldorf.

THOMAS SCHUTTE (*1954, Oldenburg) is one of the most significant German artists working today. His lively and refreshingly new examination of traditional subjects and media of art history continue to surprise audiences. In 2005 he received the Golden Lion for best artist exhibited in the International Exhibitions at the 51st Venice Biennale. As a returning participant at Documenta, his work is also highly sought in Germany; as well, Schutte is represented in the most important museums and collections internationally and has been honoured with innumerable solo and group shows in some of the most prestigious institutions: The Tate Modern, Museum Ludwig (Cologne), the Schirn (Frankfurt), the Kunstmuseum Winterthur, the Haus der Kunst (Munich), the Museum of Contemporary Art (Chicago), Centre Pompidou (Paris), and at the Kunsthalle Baden-Baden. In 2007 Schuttte will participate once again in the Skulptur Projekte Munster, the most crucial of European sculpture exhibitions. Thomas Schutte lives and works in Dusseldorf.

NORBERT SCHWONTKOWSKI (*1949, Bremen) stands out with his dense, small-format paintings characterized by their unique humour. In the United States he was made known through an exclusive solo exhibition at the Rubell Collection (Miami) during the Art Basel Miami 2005. There his paintings were presented for the first time to a large international public. Since then his work has become some of the most in-demand of German painting; the Brandenburgische Kunstsammlung Cottbus, Kunsthalle Erfurt, and the Kunsthalle Bremen all recently devoted comprehensive solo exhibitions to his work. In 2006 his contribution to the Fourth Berlin Biennial for Contemporary Art, where he opened his private studio to the public, was one of the most enthusiastically received. Norbert Schwontkowski lives and works in Bremen and Hamburg.

ANDREAS SLOMINSKI (*1959 in Meppen) is internationally known for his works that reflect with cryptic wit the artworld itself: wind mills, animal traps, performances and their relicts and, recently, large-scale Styrofoam relief carvings that repeatedly test the audience's ironic capability. Already as a young artist Slominski participated in several Biennials in Venice, the Skulptur Projekte Munster, the Manifesta in Amsterdam, the First Berlin Biennial, and the YokohamaTriennial 2001; he was also shown at the Portikus (Frankfurt) and at MMK (Frankfurt). His sensational solo exhibitions at the German Guggenheim (Berlin), the Fondazione Prada (Milano), or the Serpentine (London), as well as his unique performances-frequently done sans audience (for example in The Wrong Door, simultaneously done at The Wrong Gallery, New York, and at Produzentengalerie Hamburg)-catapulted him into a top position in international art. Andreas Slominski lives and works in Berlin and Hamburg.

JOSEF STRAU (*1957, Lubeck), for the German intellectual and avant-garde art scene, is one of the most influential figures working today-as an artist, curator, gallerist, and author. Until recently he headed the Galerie Meerrettich in Berlin, and before that he and Stefan Dillemuth lead the reputable Off-Space Friesenwall 120 in Cologne. As a crucial figure of the Cologne art scene, Strau's work was shown recently in the exhibit MAKE YOUR OWN LIFE: Artists In & Out of Cologne at the ICA in Philadelphia. In addition, his work was exhibited at the Pat Hearn Gallery (New York), Green Naftali (New York), as well as in Portikus (Frankfurt), Museum Ludwig (Cologne), and at the Prague Biennial. Strau's cycle Nazis of Suburbia-about fascist garden architecture in Germany-counts among the most exciting presentations at the last Berlin Biennale. Josef Strau lives and works in Berlin.

NICOLE WERMERS (*1971, Emsdetten) highlights aesthetic principles of modernity that are normally overlooked in our casual strolling through the glamorous, luxurious world of consumption. Her collages, sculptures and videos bring together the vocabulary of International Style with the intellectual distance of Minimal Art, Constructivism and Geometric Abstraction. Wermers' work has been shown at Friedericianum (Kassel), MMK (Frankfurt), Museum Ludwig (Cologne), Kunstmuseum Bonn, Migros Museum (Zurich), The Tate Modern and Tate Britain (London), at the Fourth Berlin Biennial, the Van Abbemuseum (Eindhoven), and at the ICA London. In May 2007 she will have a expansive solo exhibition at the Aspen Art Museum. Nicole Wermers lives and works in London.

ANNA-CATHARINA GEBBERS is an internationally active curator and writer in Berlin, Germany. She has curated shows for the 3rd Triennial of Photography Hamburg and the 4th Berlin Biennial, and she initiated the exhibition and performance-art project The Three Cities: Berlin, Milan, London. Gebbers is the author of catalogue essays for artists such as Thomas Scheibitz and Thomas Sch?tte, and her work appears in the magazines Artist and Frieze, among others. She also organises exhibitions, performances and lectures in Berlin through her workspace BIBLIOTHEKSWOHNUNG, www.acgebbers.com
All text by Anna-Catharina Gabbers