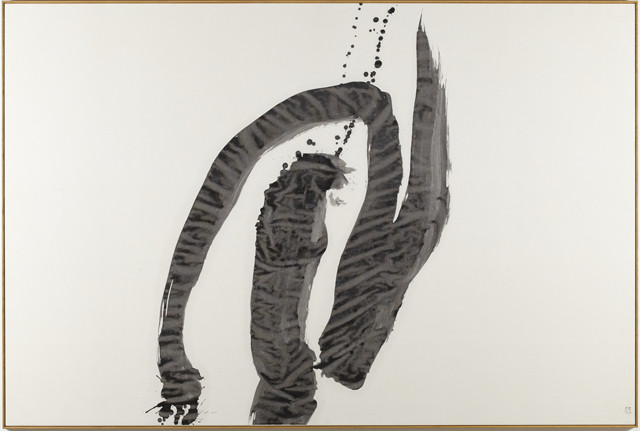 Introduction:
Yu-ichi Inoe (1916-1985) is one of the most important calligraphers.
He started studying under Sokyu Ueda at the age of 25, and since his youth he had aspiration for art, being acquainted with artists such as Isamu Noguchi. Throughout his career, he produced experimental and significant works, which were closely linked to the area of painting.
Since he became a teacher at the age of 19, Inoue strictly disciplined himself and produced calligraphy whole his life. Responding to Abstract Expressionism at the time, Inoue participated in the important international exhibitions including the São Paulo Art Biennial (the 4th and the 6th), Documenta 2, and Carnegie International 1961. In the middle of the 1950s, when he started receiving international acclaim and his antagonism toward conservative calligraphy circle at the time grew, Inoue's calligraphy was losing forms of character, moving more towards experiments such as using bundled grass as brush and drawing with enamel. His experimental "one character writings", which depict the words such as "flower" and "poverty", possess a general plasticity, and as outstanding masterpieces which lie on the border of calligraphy and painting have received high acclaim both in Japan and overseas. His work received greater acclaim after comparison by the critic Herbert Read with masters such as Jackson Pollock and, after his death, a retrospective exhibition touring 7 domestic art museums was held in 1989, while his work was also included in "Scream Against the Sky: Japanese Art After 1945" which toured from Yokohama Museum of Art to The Guggenheim Museum Soho and The San Francisco Museum of Modern Art in 1994 and 1995. In recent years, his work has also appeared in Sharjah Biennial 11 held this year from March to May, curated by Yuko Hasegawa.

» Concept:
Tomio Koyama Gallery (Kiyosumishirakawa, Tokyo) is pleased to present 10 works that were exhibited at Sharjah Biennial 11. The exhibition runs simultaneously with two more exhibitions of Inoe's works: 8/ ART GALLERY/ Tomio Koyama Gallery (Shibuya, Tokyo) will present around 10 works from his "flower" series of the "one character writings", and 12 smaller works will be on view at KAMIYA ART (Nihonbashi, Tokyo).

» Artist Biography:
1916 Born in Asakusa, Tokyo
1935 Appointed to teach at the Elementary School in Tokyo.
1945 Severely injured during the great air raid of Tokyo.
1952 Formed the new group "BOKUJIN-KAI" at Ryoan-ji Temple in Kyoto.
1971 Became the principal of the Elementary School in Kanagawa.
1976 Retired after teaching career of 41 years.
1985 Passed away (age 69) from hepatic insufficiency.
2000 "YU-ICHI Catalogue Raisonné of the works 1949-1985" (three volumes) was published (edited by Masaomi Unagami, published by UNAC TOKYO).