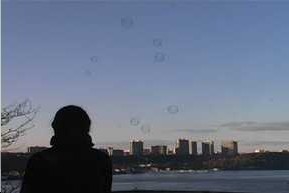 Making Places, Skyline and Car Wash are three works that, in different ways, deal with the concept of location. They are concerned with the manner by which cultural and historical specificity can bleed through subjective, utopian, or generic forms. In all three pieces there is a relationship created to a certain landscape, which allows for its meaning to momentarily float only to be pulled back by readings that are informed by subjective experiences and backgrounds.
Making Places is a series of videos and prints. In each segment, or image, something between an activity and a gesture is performed over an urban landscape; a figure blowing bubbles at a cityscape, emerging with a flashlight from among the lights of the street, scattering papers at a building, etc. Each action aims at changing, charging, or completing the structure of an urban image.
Skyline consists of fleeting images of urban infrastructure and phenomena stripped of their cultural or geographical context. Tightly cropped shots of buildings, flashing lights, reflective sidewalks, fountains, among others suggest a landscape of monumental yet, elusive signs, creating a push and pull between the culturally specific and the spectacularly ambiguous.
Car Wash transforms a social activity into an urban spectacle, allowing for the functionality associated with that activity to subside giving way to a neutralized theatrical space, which demands to be socially reassigned and reabsorbed.
Iman Issa, born in Cairo, Egypt in 1979, lives and works in Cairo and New York. Her solo exhibitions include: Proposal for a Crystal Building, Gezira Arts Center, Cairo (2003) and Lights, Gezira Arts Center, Cairo (2002) and a selection of group exhibitions include: Memorial to the Iraq War, ICA (Institute of Contemporary Arts), London, and Bloomberg Bidoun Lounge, DIFC Gulf Art Fair, Dubai (2007), and Philip, Project Art Center, Dublin and Conscious in Coma, Goethe Institute, Istanbul (2006). She was also part of the PhotoCairo 3, CIC (Contemporary Image Collective), Cairo (2005), Mediterraneo, MACRO (Museo d'Arte Contemporanea Roma), Rome (2004) and also Going Places: A Project for Public Buses, Cairo (2003). Iman Issa was involved in an Artist Project for Bidoun Magazine in their fall 2007 issue; she also was involved in several residencies including Open Studio at the Townhouse Gallery of Contemporary Art, Cairo and Wasla Contemporary Art Workshop, South Sinai (2003). Iman Isaa completed her Master in Fine Arts from Columbia University, New York (2007) and graduated from the American University in Cairo with a Bachelor of Fine Arts (2001).
www.thetownhousegallery.com/