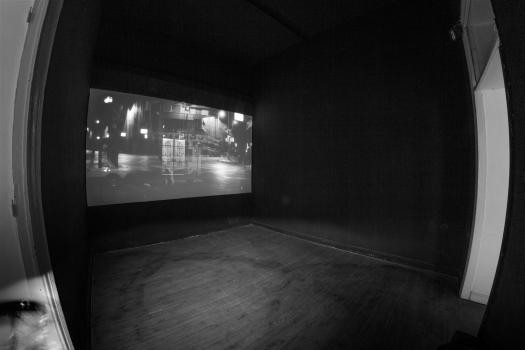 From November 14 to December 17, Townhouse presents “Liminal State,” the first biannual exhibition of Townhouse resident artists, on view in the First Floor Gallery.

The phrase “Liminal State” suggests a parenthetical moment of undoing, an in between space where old systems dissolve and new ones have not yet begun to emerge. Originally an anthropological term used to describe the threshold moment in rituals between altered states of consciousness, the term has been appropriated by other fields of study to describe the moment of stillness and disorientation that precedes new possibilities.

The Townhouse artist-in-resident experience is often described with similar vocabulary. When artists arrive in Cairo, they typically find their initial interests and plans for work evaporate, and new ones may not begin to form until after the residency is over. The residency period is often not a time for working, but rather for continuous reorientation. “Liminal State” brings together a curated selection of those works that were produced afterwards, which rarely find their way back to Cairo.

For this first iteration of “Liminal State,” four video works (three of which are being shown in Cairo for this first time) by Kaya Behkalam, Jane Jin Kaisen and Soren Thilo Funder span a period when Egypt itself entered a radically disorienting transitional period. Each artist arrived in Cairo shortly before, during, or several months after the 18 days in January, and the represented works were crafted out of this unstable, shape-shifting material. The exhibition presents strongly contrasting approaches to the challenges of reflecting on this seemingly ungraspable moment of paradigm shift, including Behkalam’s darkly dreamlike images of a deserted nocturnal Cairo in the film “Excursions in the Dark;” Kaisen’s stark, ascetic approach to addressing a highly iconic, image-laden political subject with “A rose is a rose is a rose...;” and Funder’s eerie, absurd theatrics in “Disastrous Dialogue” and “Waiting Panorama,” (the latter created in collaboration with fellow resident artist Tina Helen.)
www.thetownhousegallery.com/