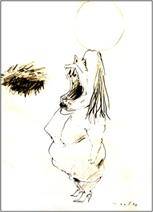 Wael Shawky’s dynamic, spontaneous drawings with the use of graphite, pastels and silver pigments show different systems, which are randomly layered together in order to show reality and beauty. In contrast to his usual work which employs the medium of installation and video work this exhibition will be showing simple subconscious drawings that he feels offer an immediate translation.
"Over the past 12 years my work has been concerned with a number of specific contexts (modernization, displacement, cultural hybridization, and marginalization). I then experienced a paradigm shift in my work on the levels of concept, practice and materials. Especially, how the material becomes translated in a “religious” fashion.
The contrast arises out of how we actually deal with the material through a specific belief that is utilized within a functional practice- a certain pragmatic thinking. For example using asphalt in my work is religious because of a basic conceptual belief that the chemical properties of the material itself possesses a certain excess beyond function. Such a position takes the work into what I term the 'religious' ", Wael Shawky.
Wael Shawky was born in 1971, Alexandria, Egypt. He completed his BFA at The University of Alexandria, followed by an MFA at the University of Pennsylvania 2000. His awards and grants include: the International Award of The Islamic World Arts Initiative, New York in 2004. The American Center Foundation Grant in 2004. Honorary Award, Rita Longa International Symposium, Bayamo, Cuba, in 2001. Received Piero Dozairo Award in 2000, Merit Scholarship in 1999 and Edna C. and Monroe Gutman award. In 1999, Philadelphia. In 1996 won the Grand Nile Prize at the 6th International Cairo Biennial. Shawky has participated in workshops and projects in Egypt, Greece, Turkey, Cuba and the USA, and most recently took part in a residency program in Codra, Thessalonica 2006 and in Istanbul 2005 based at Platform Garanti of Contemporary Art. His solo exhibitions include; The Green Land Circus, Factory Space, The Townhouse Gallery of Contemporary Art, Cairo, 2005, and Loosing identity, Ludwigsburg Kunstverein, Ludwigsburg, Germany, 2005.
www.thetownhousegallery.com/