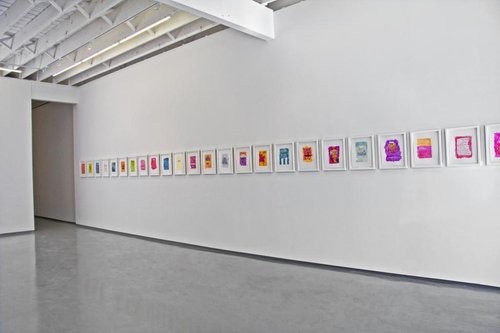 While on the lookout for new subjects and planning her drawings at her VPL day job, Austin is indulging the notion of la perruque (the wig), a concept outlined in Michel de Certeau’s text “ The Practice of Everyday Life”. La perruque is a diversionary tactic in which an employee engages in their own creative work in the guise of work for their employer. With the semblance of her public service role, Austin is seeking out overlooked qualities of visual information and finding a sentiment in the vastness of library stacks, thus engaging in a sociocultural affair all her own.

The pragmatic handling of books in a library – the sorting, stacking, placing, and replacing, has prompted this library assistant into a romantic relationship with said objects. Through a practice of aesthetic combing, Kim Kennedy Austin has acquired a sensitivity to a trend in the covers of books published in the 1970’s. This originated after a worn copy of “The Young Unicorns” by Madeleine L'Engle was discarded at the Vancouver Public Library, much to the artist’s disappointment. Having become attached to the appearance of the 1968 edition book cover, Austin developed a keen eye for covers with a similar “seventies sensibility”, selecting books with the particularly sensuous colour palette of the era. Perhaps in an effort to safeguard their provocative and paradigmatic nature she has carefully reproduced a series of book covers with watercolour and ink on paper. Austin has a strenuous drawing methodology in which the act of drawing becomes a process of study and replication. She attempts to simulate each individual cover and by doing so she is stimulating a preservation or renewal of out of date design strategies, while further enhancing the handmade-ness of the graphics.

“Pimp Juice” includes a collection of these intimate drawings from the ongoing series. Evoking a lush and tantalizing reverie with a juicy edge and jewel toned palette, the delicate watercolour works call to mind the touchy-feely political melodrama of the era in which the books were published.