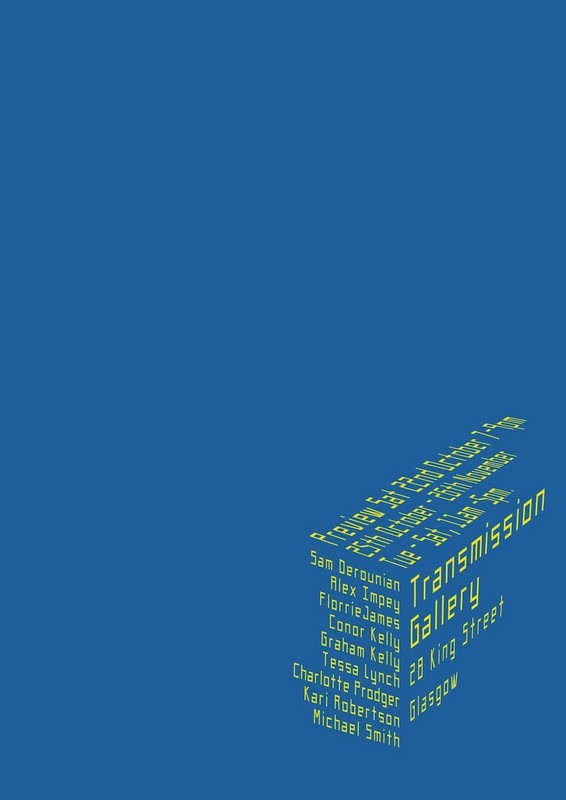 Transmission Gallery is pleased to present an exhibition drawing together new work by nine Glasgow-based artists. Non-thematic in its intentions, the exhibition spans a wide range of media and approaches.

Sam Derounian makes collaged sculptural forms and compositions using screen-printing, painting, and drawing processes. Using theatrical imagery and conventions in combination with a reductive visual language his work often evokes historical avant-garde idioms such as minimalism, modernist painting and de stijl. Recent works oscillate between the evocation of a psychological/emotional space and a critique of the notion that art, and more broadly language, is capable of this. Sam Derounian often employs a paired down vocabulary where objects are represented using their most stark and minimal signifiers in reductio ad absurdum of visual language itself. Sam graduated from the painting department at Glasgow School of Art earlier this year and has recently exhibited at The Duchy Gallery. Forthcoming shows include Title TBC at the Arches with Douglas Morland, Carrie Skinner, Craig Mullholland + More in febuary 2012, and a solo show at Bellshill cultural centre in November 2012. Throughout his time at GSA Sam worked on organising autonomous exhibitions such as Homemade Universe (2009) at 25 Duke Street (now the Duchy Gallery) and co-organized exhibitions at HOTEL GILCHRIST (49 West Princes Street) in 2010-11. http://www.samderounian.blogspot.com/

Alex Impey works with installation, sculpture and writing, producing events of relationship between aspects of objects and languages. Alex recently graduated with an MFA from the Glasgow School of Art and will be Gordon Foundation Fellow at the Glasgow Sculpture Studios 2011-2012.

Florrie James works mainly with film, painting, installation and text. The general processes in her work come from three places which all have to do with communicating something, vaguely. She identifies one of these things as ‘branding’ (of nations, of collective groups and the branding of individual practices within art); and another as ‘brains’. Florrie is also interested in the dissemination of information, which could mean power structures within learning and art practice, or could simply mean the way we understand things. Florrie studied at Glasgow School of Art and Havana's Instituto Superior del Arte. Florrie works with Emilia Muller Ginorio and Liam Casey on projects under the operative ‘I, the idea’. Florrie has worked collaboratively on film projects with Ross Little, Julia Scott and Lester Alvarez Meno. Recent projects include, I, the idea's Four Day Network of Expanded Meaning at Generator Projects, Dundee and Spine and Hand, under London Bridge with Emilia Muller Ginorio in 2010. Florrie is part of the New Work Scotland Programme 2011.

Conor Kelly‘s work draws on the grandeur and hangover of history painting to create new fictions that reflect on the inherited currencies of contemporary art practice. His work is often an attempt to articulate the questions of how art practice can operate within what Jan Verwoert describes as ‘an excessive presence of history’ and what methodologies can be employed to navigate this excess. His diptych for Transmission act as palimpsests of collapsing language. The proxy forms and registers within his work attempt to operate within a carefully constructed landscape to stage their own history simulation in the hope of unravelling and reassembling certain dominant representational systems. Conor graduated from BA Fine and Applied Arts at the University of Ulster in Belfast in 2002 and completed an MFA at the Glasgow School of Art in 2008. Recent exhibitions include Turn It On Again, SWG3 Projects, Glasgow International Festival, 2010; Open West 2010, Summerfield Gallery, University of Gloucestershire, Cheltenham, 2010; The Revolutionary Haircut, Glasgow Project Room, 2009 (solo); Arts Council of Northern Ireland - Recent Acquisitions, The Braid Mid-Antrim Museum, Ballymena NI, 2009 and And So It Goes, Artnews Projects, Berlin, 2008.

Graham Kelly’s practice investigates the use of processes as media. Referencing Modernist design ideals, his works comprise of components considered to perform abstract functions. His new video for Transmission examines the dilution of intense experiences to a point of apathy as the viewer is drawn into the peripheries of film production. Graham has recently exhibited at Intermedia Gallery, Market Gallery and the Grace and Clark Fyfe Gallery. His work is included in the forthcoming exhibition Lost Lake, Chalk Burst at Generator Projects, Dundee and he will have a solo exhibition at Glasgow Project Room in 2012.

"myths are formed by diseases of language"
Max Muller

Kari’s work traverses the fault lines between reality and fiction, presentation and representation. Empirical or dialectical matter is processed through absurd subjective systems, constructions of meaning dissected through auto-destructive conceptual mechanisms. Kari graduated in 2011 with BA(hons) in painting and printmaking from the Glasgow School of Art.

Charlotte Prodger graduated from Goldsmiths in 2001 and recently completed the MFA at Glasgow School of Art, with an exchange at CalArts. She is a member collaborative writing group Brown Study and used to be in the band Muscles of joy. Her work has been shown in Paris, Zagreb, London, Los Angeles, Berlin and New York. Her first solo show opens at Kendall Koppe Gallery in November, followed by a solo show at Intermedia CCA during Glasgow International in April 2012.

Tessa Lynch’s practice revolves around the concept of collaboration with the past. This is often explored by overlaying pre-made or historical imagery with new visuals or actions with the intention of creating new situations. This practice results in collage like performance and graphic works that re-imagine the past and that waver between truth and myth. The essential factor that binds these 'collages' together is the narratives that emerge from the combinations created with the past and present converging. Tessa graduated from Tapestry BA (Hons) Edinburgh College of Art in 2007. Her recent exhibitions include Joy Axe, Embassy Gallery, Edinburgh 2011; Keep Floors and Passages Clear, One Thoresby St, Nottingham; White Columns, New York | You Are Here (off site performance) and Alexandrite (off site performance and exhibition) both at Collective Gallery, Edinburgh [Solo] and Manifesten, Trolley Gallery, London (all 2010). She was selected for Collective’s New Work Scotland Program in 2007.

Michael Smith’s practice takes the form of softly spoken interventions with mundane, everyday, yet ephemeral details of his own environment. His previous work has included durational performances such as standing with a receiver to his ear in a telephone box for a whole day, and reading a wordless book upon a park bench. There is however a calm cinematic quality to Michael’s images that transform the mundane in to the poignant. Michael graduated from Glasgow School of Art in 2010. He is currently on the committee of artist-run organisation The Mutual.
www.transmissiongallery.org