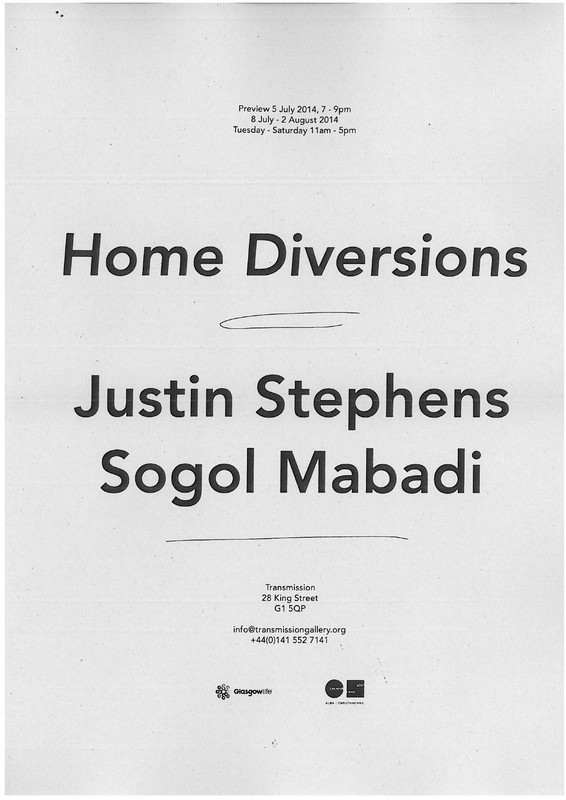 Transmission are delighted to present Home Diversions, a two-person show with work by Justin Stephens and Sogol Mabadi. Having both shown in Glasgow and internationally, it will be the first time the two artists have exhibited together.

When we asked Justin and Sogol to make a show together, our initial email presented them with some thoughts on the application of found objects and the multiple meaning of ‘gesture’ as potential links between their respective practices - such as the banality of objects re-imagined and loaded with sentiment. Or the gesture involved in the invitation from the gallery to the exhibiting artists. We began by thinking of the show as two solo exhibitions in the same space: a sense of accountability and restraint inherent to Justin and Sogol’s work made us feel that they could play well together.

In Justin Stephens’ practice, the history of abstract painting is both acknowledged and manipulated like plasticine. His paintings are formed of oblique marks and banal objects that offer themselves to be absorbed from the surfaces and textures of the studio onto the canvas. Simultaneously self-assured, scrappy and reticent, the resulting works function as portraits of an intent practice and studio exertions. For Home Diversions, Justin will be presenting a selection of paintings produced intensively in the run up to the show.

Sogol Mabadi’s work for Home Diversions will not include performance and will be the first purely sculptural exhibition that Sogol has shown, a combination of sculptures that were first used four years ago in a performance, and new pieces; together comprising The Family. Originally cased in material but now bare, they are an attempt to ‘lift a veil’. They are here presented without the many phases of hair and material that have been added and removed from her performances and objects. Now lifted - The Family shed their canvas skin. The sculptures have been re-made from the original materials, with added foam for support and corks to contain and hold. Decoration or ‘masking’ was (where possible) avoided.

The show also coincides with the removal of the wall at the front of the gallery. The decision was based on a practical restructuring of the space and less definite feelings on opening up and summertime.
www.transmissiongallery.org