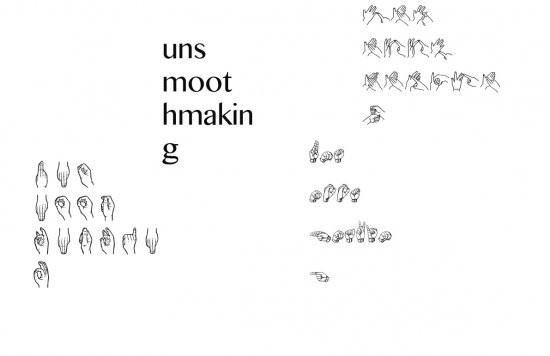 But I am getting ahead of myself. You are sitting or standing in a room around a table, or not. The room is empty or cluttered or it is not particularly empty and nor is it particularly cluttered. It is in the place where you live. It is somewhere you have travelled to at the invitation of a professional acquaintance or a friend or out of a sense of personal curiosity. It is where you will speak or sing, or climb or lie down upon the floor or perform other actions unanticipated.

Psykick Dancehall, Giuseppe Mistretta and Sarah Forrest will be presenting new video works in Transmission that draw from their month long residency of October last year at the artist run initiative Lothringer13_Laden, Munich.

The exhibition will open with the launch of a publication, a collaborative work that operates as a guidebook or manual for future spoken word performances, some of which will be presented throughout the opening afternoon event. The artists would like to invite you to perform two of the texts using the book as your guide. If you would like to be involved please contact the gallery.

The publication will be launched at Lothringer13_Laden on the 22nd June

In 2010 a relationship was formed between Transmission and Lothringer_13 Laden stemming from the Munich based artist Stephan Dillemuth’s residency and exhibition at Transmission, The Hard Way to Enlightenment. A shared interest was formed in making links across Europe, between artists working collectively as self-organised enquiry and resistance tactics against ­­­­the privatisation of the public sphere and its implications within the realms of art, research and education.